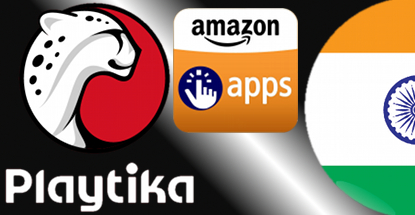 As reported by Amazon Developer blogger Nathan Lam, Amazon also provided higher player retention rates than other platforms. Thirty days after downloading Slotomania, Amazon-based retention was “10%-20% higher” than on Android and iOS, according to Playtika’s biz-dev VP Elad Kushnir. Amazon users were similarly easier to convert to in-app purchasers of virtual goods (150% more likely than iOS and 170% more than Android).

Further boosting Amazon’s desirability, Kushnir noted that Amazon’s Fire OS was built on Android, meaning over 75% of Playtika’s Android apps required no additional development to work on Kindle Fire devices. Playtika expects to have the remainder of its titles available on the Amazon Appstore within the next year and is looking at expanding its reach to newer Amazon devices like the Fire Phone.

ANDROID US GAMERS RULE, BUT INDIANS LOVE THEM SOME CARD GAMES
Mobile analytics group Flurry recently crunched numbers on Android game play that showed Americans spend significantly more time playing games than players in other countries. Based on a study of 60k Android devices, Flurry says US gamers spend an average of 51.8 minutes per day playing on their Android devices, easily eclipsing the global 37-minute average. Germany was second on the list with 47.1 minutes, while Russia (40.8) and Italy (38.5) also ranked above the norm.

Flurry’s Jarah Euston broke out what types of games were most popular in what countries, with the Cards & Casino category scoring highest in India, representing one-third of minutes played. The UK was second with 17%, followed by the US (14%), while China, Germany Italy tied at 6%. Indian gamers played an average of 68 Cards & Casino sessions each month, more than twice the global average of 31. India’s gamers particularly enjoy playing ‘teen patti’ and solitaire, as well as traditional poker.

However, in terms of the percentage of gamers by category, the US and the UK topped the Cards & Casino chart, with one-fifth of each country’s gamers admitting to enjoying such games. India came third with 17%, followed by Germany (14%), Italy (10%), Russia and Mexico (7% apiece), China (6%) and South Korea (5%). Latest estimates by Eilers Research suggest social casino gaming revenue in the US will top $2.7b this year.