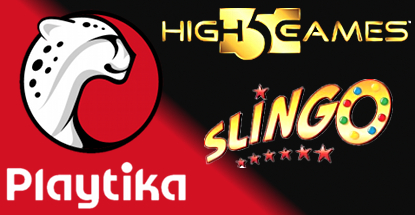 Caesars Interactive Entertainment (CIE) plans to consolidate its various social gaming divisions under a single brand. CIE, the current undisputed social casino revenue king, has acquired a number of social gaming development studios over the past couple years, including Playtika, Buffalo Studios and Pacific Interactive. CIE used the Casual Connect trade show currently going down in San Francisco to announce that its different social gaming operations will now be incorporated into the Playtika brand.

Nearly a year after acquiring the studio behind slots-bingo hybrid Slingo, Seattle’s RealNetworks has announced a reboot of the game. RealNetwork’s GameHouse division used the Casual Connect confab to announce the imminent beta test of Slingo Adventure on Facebook, with iOS and Android mobile versions expected this fall. GameHouse VP Ken Murphy told GamesBeat that the reboot features “more gameplay variety” because the increasingly mature social casino market makes differentiation critical to retaining existing players and attracting new ones. Murphy said the company was “working on a comprehensive strategy for putting this intellectual property to use” and that there would be “Slingo-branded games in each of our environments for GameHouse games.” Slingo Supreme for iOS is currently second on the iTunes paid casino app chart.

Social gaming developer High 5 Games (H5G) has burnished its social casino library with the release of a number of new slots titles for its High 5 Casino and Asian-facing Shake the Sky Casino. The High 5 Casino has added three titles – Desert Rose, The Big Chase and Dr. Amante – while Shake The Sky has added Dragons Of Avalon, Geo Quest and Hail King of Fortune. H5G has also ported its popular The Legend of Robin and Marian title to the land-based realm for International Game Technology (IGT) machines.

H5G also recently announced the launch of six of its slots titles – including Jaguar Princess, Siren and Shadow of the Panther – on the Gamesys-powered New Jersey real-money online gambling sites TropicanaCasino.com and VirginCasino.com. H5G already supplies game content to the CIE-powered CaesarsCasino.com website in New Jersey.