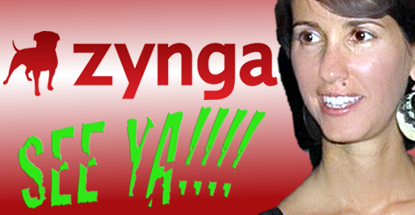 Olsha was hired with great fanfare two years ago, having been lured away from UK-listed online gambling firm 888 Holdings for the express purpose of leading Zynga to the real-money promised land. Of course, that was before Zynga hired Don Mattrick as its new grownup CEO and Zynga founder/enfant terrible Mark Pincus was relegated to the role of chairman.

According to VentureBeat’s Dean Takahashi, Olsha left Zynga in August after determining it was time “to finally do my own thing.” Olsha said she’d already raised sufficient cash to fund her own social casino startup, the first product of which she hopes to unveil in the first quarter of 2015. Originally hired as Zynga’s chief operating officer for new markets, Olsha’s role shifted to developing the company’s social casino operations after Mattrick announced Zynga would be putting its real-money gambling plans on the back burner.

Zynga confirmed that Olsha had departed the company but declined further comment. Olsha’s exit marks the culmination of the executive housecleaning Mattrick has embarked upon since taking the reins in June 2013. Earlier last week, Zynga announced the appointment of Pete Hawley as vice-president and general manager. Hawley is the former CEO of games developer Red Robot Labs. In July, Zynga appointed Google’s former VP of engineering Regina Duncan to Zynga’s board of directors.