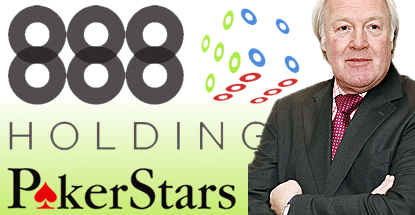 888 says the good times have carried on into Q3, with July revenue up 15% year-on-year. It’s perhaps indicative of 888’s habit of producing positive results that investors barely took notice of Tuesday’s interim management statement, as 888’s shares closed out the day’s trading virtually unchanged at 121p.

While 888’s poker vertical and its US operations are humming on nicely, 888 CEO Brian Mattingley appears keen to safeguard their future potential. In June, Mattingley said he would welcome the imminent entry of PokerStars into New Jersey’s regulated online gambling market as it would compel the state’s other licensed operators to “work much harder.” The launch of the powerful Stars’ brand would “expand the market” and Mattingley would “much rather have a small slice of a large pie than a big piece of a small pie.”

Fast forward six weeks and Mattingley appears to have had a change of heart. Late last month, Global Gaming Business quoted Mattingley saying ‘bad actors’ like Stars should be made to “suffer a penalty where you can’t operate for a given period of time.” Mattingley said Stars had “built a significant worldwide business on the spoils of illegal wagering in the US” by continuing to serve the US market after other operators withdrew in 2006 following passage of the Unlawful Internet Gambling Enforcement Act (UIGEA). Mattingley suggested a two-year regulator-imposed timeout on Stars would allow operators like 888 to “establish our brands.”

As for the rest of us, we’re now trying to establish who it was that got to Mattingley and convinced him to see the alleged error of his ways. Smart money’s on Caesars Entertainment, for whom 888 currently provides online poker technology and was widely presumed to be responsible for the American Gaming Association’s previous campaign to prevent Stars from entering the New Jersey market.