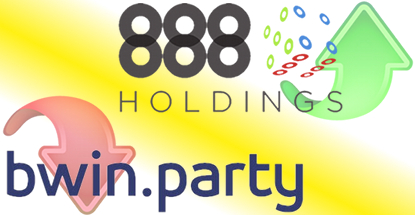 UK-listed online gambling operator 888 Holdings issued a trading update on Wednesday claiming a “very strong performance” over the first half of 2014. 888 will release its detailed H1 report on Aug. 27 and says it anticipates its earnings will come in “significantly ahead” of the same period last year. Lacking a crystal ball, 888 acknowledges it can’t say for sure that the rest of 2014 will mimic the first half, but the company’s board “continues to look forward with confidence.” Investors welcomed the buoyant (albeit detail-free) update, pushing 888’s shares up nearly 4% to close out Wednesday’s trading at 125p.

888’s update threw analysts for a bit of a loop, as Numis chose to boost its full-year earnings for the company by 8%. Numis said 888’s update was evidence that the company’s “operational excellence converts into bottom line success.” Investec chose to place its own forecasts and price target under review, citing an inability to “more precisely model the upgrade” due to the lack of specifics in 888’s announcement. Regardless, Investec expects 888’s H1 earnings will increase at least 10% and said the update indicated a “further continuation of growth” across 888’s core verticals.

The optimism surrounding 888’s good performance didn’t extend to LSE rival Bwin.party digital entertainment, which saw its shares dip below 89p on Wedneday before inching upward to close at 89.5p, down over 3% on the day and yet another all-time low for the firm. Late last month, rumors swirled that the struggling company was considering selling off pieces of itself in a bid to realize some immediate cash gains, although the company has insisted the rumors are unfounded. Bwin.party is scheduled to release its own trading update on July 15, with full H1 results being made public on Aug. 29.