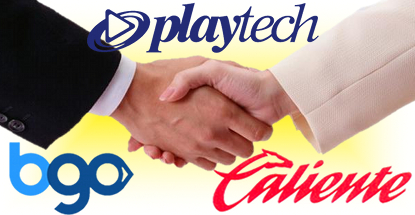 Online gambling technology provider Playtech saw its shares rise over 7% on Thursday after the company reported strong H1 earnings and announced a trio of new deals. Revenue in the first six months of 2014 rose 21.2% to €214.4m while profit hit €96.8m, up 44.8% once you discount the proceeds Playtech booked last year at this time via the sale of its stake in the William Hill Online joint venture.

On the down side, the bingo vertical declined 9.4% to €8.4m and Playtech’s iPoker division fell 7.6% to €7.4m. Ironically, the bingo decline is blamed on licensees taking on more Playtech product, resulting in changes to royalty structures. Poker’s downfall is blamed on a soft market, but Playtech says the situation has actually improved since the last six months of 2013.

In geographic terms, Europe’s share of Playtech revenue fell seven points to 57% in H1. Meanwhile, grey- and black-market operations in Asia rose 10 points to 34%, while the rest of the world’s share slipped three points to 9%. Those growing Asian operations could prove problematic, as the UK Gambling Commission is requiring all companies – even software suppliers – seeking to be relicensed under the country’s new gambling regime to legally justify their operations in any market from which they derive 3% of more of overall revenue.

LET’S MAKE A DEAL (OR THREE)
Looking forward, Playtech says daily average revenue in the first two months of Q3 is up 21% over the same period last year. Playtech also said it has inked a trio of new major turnkey deals and yet another acquisition. The first deal will see Playtech provide Mexican casino and sports betting operator Grupo Caliente with sports betting software at 140 retail locations in Mexico and 50 more locations across South America. The 10-year deal will also see Playtech develop Caliente’s online business as Mexico liberalizes its online gambling market.

The second deal involves Playtech providing sports betting and gaming technology for “a major media brand” in Italy. The five-year deal will see the launch of a new Italian website that the unnamed brand will support with its “extensive marketing assets.”

Playtech also announced it had inked a deal to become the primary software supplier to UK bingo operator BGO Entertainment (formerly Mandalay Entertainment). Playtech has also splashed out £10m to acquire a one-third stake in BGO.

Playtech’s cash position as of June 30 was €366m, down from €576.2m last June. The company says £100m of this reduction was due to a special dividend the company paid in March, most of which would have gone to company founder, largest shareholder and “jailbird pornographer” Teddy Sagi. Regardless, the remaining pile is large enough for the company to continue to seek out further strategic opportunities, including ‘bolt-on acquisitions’ should the opportunities arise.