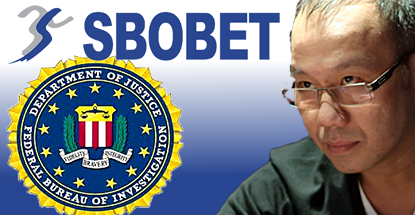 Asian online betting giant SBOBET has issued a statement regarding claims that the illegal sports betting operation broken up last week in Las Vegas was using SBOBET’s website to process wagers on the 2014 FIFA World Cup. High-stakes poker player Paul Phua (pictured) and seven other individuals were arrested over the weekend after the FBI claimed they had been processing illegal football wagers online via SBOBET from a trio of high-roller suites at Caesars Palace casino in Las Vegas.

In a statement on the SBOBETimes.com website, SBOBET said the allegations that SBOBET was involved in the Phua betting ring’s activities were “entirely without foundation.” SBOBET insisted that “neither [Phua] nor those arrested with him have any involvement or association with the ownership or management of SBOBET, or with its operators, Celton Manx Limited and Richwell Ventures Limited.”

SBOBET went on to say that the United States is “one of more than 30 jurisdictions” from which SBOBET does not accept wagers and thus any bets placed by Phua with the site from Caesars Palace “could only have been made illegally, as press reports confirm.” The FBI press release announcing Phua’s arrest had suggested the betting ring’s wire-room setup in their Caesars suites had been “remotely controlling computers based overseas” in order to place their online wagers.

Phua, who was released on bail on Monday after posting bail of $2m in cash as well as offering his personal $48m Gulfstream jet as collateral, has been linked to Hong Kong’s infamous 14K Triad and is believed to have a net worth of between $300m and $400m. Phua’s son, who was among those arrested on the weekend, was also released Monday but not before confirming to federal agents that his father held a majority ownership stake in IBCbet, another large Asian online betting site licensed by the Philippines’ First Cagayan Leisure and Resort Corporation.

Assistant US Attorney for the District of Nevada Kimberly Frayn said some of Phua’s poker buddies in Las Vegas might have been involved in the alleged illegal activity that went on at Caesars, although she declined to offer any names. Phua’s attorney David Chesnoff had indicated in court that poker pro Andrew Robi was among the poker players passing the hat to help raise cash so Phua could make bail.