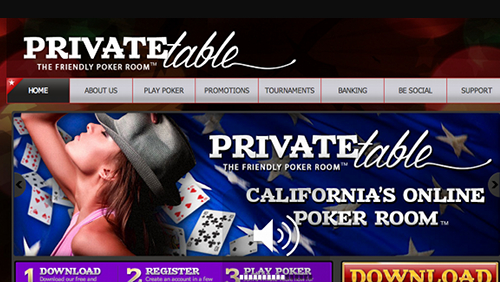 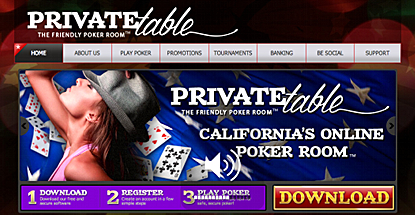 Apparently fed up with the inertia gripping California’s efforts to enact a regulated online poker system, one California tribe is taking matters into its own hands by launching its own real-money online poker site. The Iipay Nation of Santa Ysabel, a federally recognized tribe located in San Diego County, is reportedly planning to launch PrivateTable.com for real-money online poker play on Monday, July 14. The site is licensed by the tribe’s own regulatory body, the Santa Ysabel Gaming Commission.

According to a press release brought to the world’s attention by poker blogger Marco Valerio (@agentmarco), the company behind the tribe’s online venture, Santa Ysabel Interactive, has partnered with the Kahnawake Gaming Commission to host “a portion” of its “interactive gaming structure” within the Mohawk Territory of Kahnawake. The release says that, as two sovereign nations, the Iipay and the Kahnawake Mohawks have established an “inter-Jurisdictional Agreement” to authorize this arrangement.

The Iipay Nation says it supports efforts by California’s legislature to enact a regulated online poker market, but Santa Ysabel Interactive “has decided to rely on the tribal sovereignty and the provisions of the federal Indian Gaming Regulatory Act (IGRA) to offer I-poker from the Tribe’s reservation.” The tribe says it “currently has no plans” to offer any slots or other house-backed games online “but will consider offering other gaming consistent with IGRA.”

The PrivateTable site is available to California residents 18 years of age or older, three years younger than the 21-year minimum suggested by the other tribal online poker proposals the state is currently considering. The site’s T&C’s say it was “specifically designed for residents of California and other approved jurisdictions.” PrivateTable doesn’t accept customers from “certain United States territories” or from most European markets that have launched or are in the process of launching their own regulated online markets, including Belgium, Bulgaria, France, Greece, Italy, the Netherlands and Spain.

Registering on the site produces messages stipulating that while users from “many jurisdictions” can use the site for free-play poker, players must be “a California resident and be located in the state of California” to play tournaments or cash games. While withdrawals can be made from “anywhere in the world … player deposits will only be accepted from California.”

PrivateTable utilizes software licensed by IG Soft aka Dobrosoft, the same software currently powering the Winning Poker Network (WPN) and its various skins, including Americas Cardroom. PrivateTable offers deposits and withdrawals in person “at our associated Smoke Shop” or via the Finpay (Financial Payment Network) e-wallet, which also allows transactions via Bitcoin.

The Iipay Nation operated the Santa Ysabel Resort and Casino from April 2007 until February of this year, when it shut down for good after filing for bankruptcy in 2012, unable to pay what UT San Diego reported as $50m in debts. At the time, tribal chairman Virgil Perez stated that he was committed to exploring other business ventures, including ‘gaming on a limited scale.’

Whether or not PrivateTable launches real-money play as planned on Monday, its mere existence is guaranteed to provoke reactions on multiple fronts, including the state’s other tribes as well as the state and federal governments. Previous efforts by tribes to launch online gambling sites offering off-reservation access have failed to get very far, as evidenced by the closure in February of the Cheyenne and Arapaho Tribes of Oklahoma’s PokerTribes.com site. Stay tuned…