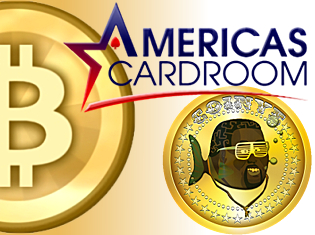 Winning Poker Network (WPN) site Americas Cardroom has joined the ranks of online poker sites accepting the Bitcoin virtual currency as a payment option. For the moment, the Americas Cardroom cashier is limiting its Bitcoin dealings to deposits only, which will be converted to US dollars at the tables. The site will reportedly use a “blended exchange rate” to calculate just how many greenbacks you’ll get for your Bitcoins, the value of which can change dramatically within the space of an hour. Bitcoin withdrawals are reportedly planned for a future cashier upgrade.

While dedicated Bitcoin poker sites like SealsWithClubs have long been an option for online players, iPoker skin WinPoker became the first major poker network site to introduce Bitcoin cashier options in March 2013. Last week saw social game developers Zynga launch a ‘test’ of Bitcoin as a payment option on select Zynga.com titles, but not for its popular free-play online poker game. In related news, Lock Poker has announced it will now accept deposits in empty soda bottles, while withdrawals will continue to be limited to the imaginations of Lock’s public relations department. (Sorry, but it’s just too easy.)

COINYE WEST REBRANDS AFTER KANYE UNLEASHES LAWYERS
As Bitcoin becomes an increasingly mainstream option in the online poker world, the race is on to see which site will be the first to accept the new Coinye West virtual currency. That is, unless hip hop icon Kanye West, the notoriously humorless inspiration for the currency, calls off his lawyers. West’s attorneys have filed a cease-and-desist letter with Coinye’s developers, claiming the face on the currency’s golden disks bore more than a passing resemblance to Mr. Kardashian.

In response, the developers have dropped the name ‘West’ from their product and changed the image on the coin to what appears to be Kanye’s head on the body of a fish – a likely nod to the South Park Fishsticks episode, in which Kanye is the only person in America who doesn’t get a joke. They also advanced the currency’s planned official release from Sunday (12) to Tuesday (7) “due to legal pressure.” Expect Kanye to zip up his leather jogging pants and run on over to Coinye HQ any second now to deliver the smackdown in person, after which he’ll likely go looking for the dastardly developers behind Kardashicoin.