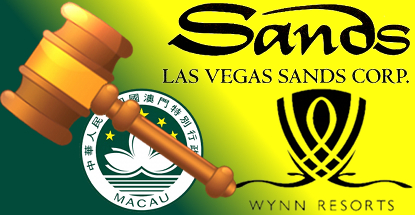 A Taiwanese businessman has slapped a $5b lawsuit against Las Vegas Sands, claiming the casino operator would never have received a Macau gaming license without his help. Shi Sheng Hao aka Marshall Hao and his company Asian American Entertainment (AAE) filed suit in US District Court in Nevada on Wednesday accusing Sands, chairman Sheldon Adelson and two of his top lieutenants of chicanery during their joint bid for a Macau casino concession some 13 years ago.

The gist of Hao’s complaint is that AAE and Sands had partnered on a joint casino bid in 2001, when Macau was in the process of ending Stanley Ho’s monopoly and opening up the market to international casino firms. However, before the concessions were awarded in 2002, Sands terminated its AAE deal and partnered with Galaxy Entertainment Group on an ultimately successful bid. Hao claims that winning bid would never have been possible without the market savvy he’d provided Sands before the parties split, so make with the billions already.

This isn’t the first time Hao has made such claims, having launched a similar suit in Nevada back in 2007, which was dismissed in 2010 after Hao’s attorneys quit and he failed to hire new ones in time. In 2012, Hao filed a $375m breach of contract suit in Macau containing similar allegations, all of which Sands vigorously denied. This time around, Hao is seeking $5b in damages, 72.5% of Sands’ Macau operations and co-ownership of Sands’ Venetian copyright. And (probably) a pony.

Last May, Sands was ordered to pay $70m to Hong Kong businessman Richard Suen, who claimed he’d been promised a ‘success fee’ if he helped Sands obtain a Macau concession. Courts have since added $32.6m in interest and legal fees to Suen’s tab, all of which Sands continues to appeal. Bottom line, even if his suit is ultimately successful, Hao will have a long wait until he sees a dime.

WYNN NOT OFF THE HOOK FOR COTAI LAND DEAL
Meanwhile, a land deal by Sands’ Macau rival Wynn Resorts has attracted the attention of the local Commission Against Corruption (CAC). In 2012, the Wall Street Journal questioned a 2009 deal in which a Wynn subsidiary paid Tien Chiao Entertainment $50m to walk away from the Cotai Strip property on which the new $4b Wynn Palace is being built. The deal was brought back into the spotlight last month following the launch of a new muckraking site by International Union of Operating Engineers director Jeffrey Fiedler, who has also questioned Wynn’s connections to junket operators with tenuous links to triad activity.

On Wednesday, Macau’s Land, Public Works and Transport Bureau issued a statement saying the land deal in question appeared to have followed all necessary legal procedures. But on Thursday, CAC chief Vasco Fong Man Chong told reporters that his unit had “started analyzing some details” about the Wynn property deal and the anti-graft watchdog didn’t rule out launching an official investigation depending on what its analysis revealed.