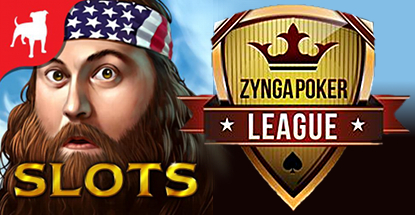 Social gamers Zynga will launch their new Zynga Poker Leagues on June 23, offering players the chance to win a new Ford Shelby GT500. The eight-week long season corrals Zynga Poker players into pools of 100, in which they will scratch, claw and bite to earn the most League Points. These points can be used to enter a sweepstakes held on Aug. 17 when the first season comes to its climax. Along the way, players can win real-world prizes like vacations, tablets and the aforementioned muscle car.

Zynga’s social casino business expanded this week with the release of a new slot based on the A&E reality television series Duck Dynasty. The follically unchallenged Robertson family has already been featured on Zynga’s Hit It Rich slots title, but this is the first Zynga slot they can call their own. Zynga says the new title, which is available for iPhone, iPad and Android, “pulls players into the swampy South with quirky surprises and nods to typical Robertson family funny business.”

Trouble is, that family fun has included patriarch Phil Robertson’s infamous homophobic tirade in GQ magazine last December. Zynga, which at the time had been promoting the imminent arrival of the Robertson clan to Hit It Rich, temporarily scrubbed all mention of the family from the site, leading to a volume of player hate mail on game forums and threats of potential boycotts. Zynga eventually incorporated the Duck Dynasty content into Hit It Rich as planned.

In response to suggestions that Robertson’s presence in the new Duck Dynasty slot might anger Zynga’s LGBT players, the company told GamesBeat it is “committed to supporting diversity and the rights of our players and employees, including the LGBT community.” Zynga noted that it had filed amicus briefs with the US Supreme Court opposing the Defense of Marriage Act and California’s Proposition 8 ballot initiative. The new slot is based on the TV series but “does not reflect the personal beliefs of one individual.” Zynga said it was “deeply committed to fostering a community built on respect and equality” and would be “listening to our players to incorporate their feedback into our games.”