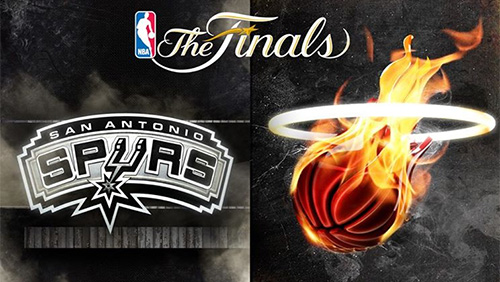 Here we go again, two NBA titans for the championship of the world. Will it be LeBron James, Dwayne Wade and Chris Bosh for a third consecutive season or will it be a revenge for Spurs for losing the last season—which is why we have decided to ask our readers, “Which team will win the 2014 NBA Finals?”

The results are quite close, 52 percent answered San Antonio Spurs and 48 percent for Miami Heat.

With that, let’s do the recap.

The first game was firmly in Miami’s grasp; before LeBron’s legs stopped working due to scorching temps caused by the AT&T Center’s broken A/C. Spurs took the advantage and won a sweaty victory at 110-95.

And just like last year’s finals, the Heat took Game 2 at 98-96 after a brilliant and cramp-free performance of LeBron and of course, for setting up Chris Bosh for the go-ahead-corner three. The Heat was able to stick to their game for 48 minutes and was rewarded a victory.

Kawhi Leonard’s 29 points in Game 3 made it the best game of his career. He made 10 of 13 shots and scored 16 points in first quarter which gave Spurs total control and defeated Heat at 111-92 at their own home court. Heat fans went for the exits with four minutes left in this game.

Then last night, Spurs dominated the game, again and beat the Heat at 107-86, leaving them far behind in the best-of-seven series. All 13 Spurs scored and Kawhi Leonard once again led the way with 20 points.

Game 5 is on Sunday in San Antonio. Is it going to be the championship for Spurs or Heat breaking the history of no team has come back from a 3-1 deficit and won the Finals?

For next week’s polls, we ask our readers, “Who got the better of the Amaya-Stars Deal?” Check back next week to see what our readers think.