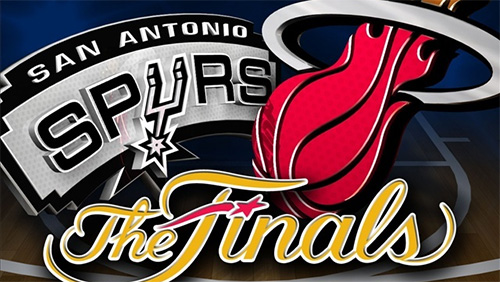 The Miami Heat and San Antonio Spurs are back for seconds. Outside of Indiana and Oklahoma City, this was the NBA Finals that the people wanted. For gamblers the world over, this is the match that offers a chance for more rewards, or for those who lose out last year, this is a chance at redemption.

The story lines on Heat-Spurs II will litter the airwaves from now until the start of Game 1 this Thursday. But like always, we’re not so much interested on stories of revenge and retribution, as we are on scrutinizing the plethora of odds being offered throughout the series. This is where the fun starts, people.

The championship odds for the series has the revenge-seeking Spurs as the predictable favorites at 5/6 odds while the three-peat seeking Heat are at even-money to make it twoinarow against San Antonio. Given how close last year’s finals were, these odds couldn’t have been split any more down the middle that a hot knife cutting butter in even proportions.

On a purely basketball and narrative standpoint, the smart money looks to be on the Spurs to expunge last year’s horror, but 5/6 odds against LeBron James isn’t going to convince a lot of people to bet huge lumps of money on San Antonio.
So we’re going to let championship odds fall where they may, knowing that betting game-by-game will probably net you bigger action. The real interesting odds are the other series-long wagers that can potentially swing from game to game.

One of the most popular series props is the series outcome, wherein bettors pick who wins the title and how many games it will take to do it. This year, the NBA Finals returns to the 2-2-1-1-1 format for the first time in more than 20 years, so bettors have to take into equation that Game 5 will be played in San Antonio while Game 6 will be played in Miami, if it even gets that far.

Another popular prop bet that we always look to check out anytime the NBA Finals arrives is the Finals’ MVP. James is the understandable favorite at 11/10, but those odds will mean little if Miami doesn’t win the title.

San Antonio’s Big Three all have decent odds, beginning with Tim Duncan at 5/2, Tony Parker at 2/1 and Manu Ginobili at a pretty interesting 11/1.

By contrast, the Heat’s next likely Finals MVP candidate is Dwyane Wade at 7/1, followed by Chris Bosh at 20/1. Not appealing at all if you have LeBron on your side.

Outside of this five, the most appealing long shot is the Spurs’ Kawhi Leonard at 50/1. Trust us when we tell you,“Leonard will have a huge series, and if the Spurs win, he’s going to have a good shot as the Big Three to take home the honor. At 50/1, bet small and hope it cashes.