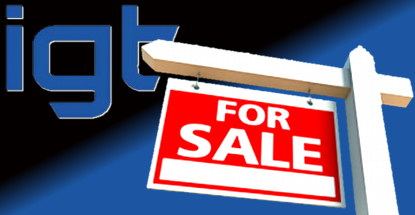 Gaming device maker International Game Technology (IGT) is reportedly shopping itself around to prospective buyers. On Monday, Reuters reported that IGT had hired investment bankers/corporate matchmakers Morgan Stanley to scour the globe for anyone who might fancy the Nevada-based company, which has a market cap of over $3b. The quest to find IGT a sugar daddy (or mommy) has apparently been going on for the past two months, with IGT hosting management presentations for potential life partners.

Asked to comment on Reuters’ scoop, IGT spokesperson Susan Cartwright would only tell Bloomberg it was “not unusual” for IGT to be “a topic of speculation” in a consolidating industry. IGT shares closed out Monday’s trading up over 14% to $14.31 but the stock has fallen over 30% in the past year as the company struggles to post positive numbers in the flaccid US casino business. In March, IGT announced it would cut 7% of its global workforce in a bid to improve its bottom line.

The only real bright spot in IGT’s recent quarterly reports has been the social casino operations of its DoubleDown Interactive division. Eilers Research analyst Adam Krejcik has suggested IGT may consider spinning off DoubleDown, which it acquired in 2012 for around half a billion dollars. The deal was widely criticized at the time for being overly generous but, as DoubleDown’s profits rolled in, IGT’s rivals have followed it down the social gaming path. Last week, Bally Technologies struck a $100m deal to acquire social casino developers Dragonplay.