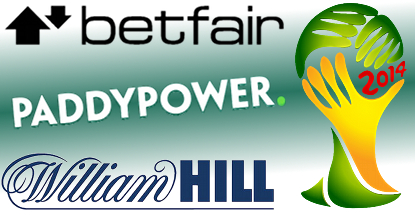 Exchange betting specialists Betfair got a load of nearly free publicity on Tuesday after a truck carrying a giant polystyrene octopus ‘broke down’ in the middle of London’s Oxford Circus. The supposedly mortified lorry driver claimed to be helpless as the truck and its eight-legged cargo blocked the walkway linking Regent Street, allowing plenty of photo ops for rush hour passersby. A Betfair spokesman confirmed that the octopus was on its way to the company’s Hammersmith office as part of a World Cup promotion trading on the memory of 2010 World Cup match picker Paul the Octopus.

With the 2014 FIFA World Cup now just a week away, one can expect countless more marketing stunts of this nature as online gambling companies seek ways to steer football punters their way. Paddy Power has already enlisted Nobel prize-winning physicist Stephen Hawking to come up with pseudo-scientific theories as to which nation will prevail in the planet’s premier sporting event. For the record, Hawking suggested host nation Brazil “have enough quality” to win the trophy, while England “couldn’t hit a cow’s arse with a banjo.”

Bookmakers William Hill have reportedly set a £200m revenue target for the World Cup, double the sum the company reaped via the 2010 tournament. To boost its chances of reaching its goal, Hills has embarked on a new marketing campaign. The ‘Make Every Moment Matter’ television spots are focused on increasing awareness of punters’ ability to make all manner of in-play wagers, rather than merely wagering on the match outcome.

Hills marketing director Alex O’Shaughnessy told Campaign Live that the firm had worked with London creative agency Creature “at every stage and we had input into the creative work.” Queried as to the difference between Hills’ new campaign and the much discussed new effort from Ladbrokes, O’Shaughnessy said Hills had chosen to focus less “on the character of the punter, but on what the punter needs.”

O’Shaughnessy told The Drum that Hills operated “in a very competitive market … and must work harder to ensure we are creating an experience that our customers enjoy and through that enjoyment we can retain as many of them as possible.” O’Shaughnessy said Hills had a reputation for being “very rational and serious” but was attempting to communicate the benefits of wagering with Hills “in a way that can occupy much more of an emotional space.” Just a thought, but we hear punters can get quite emotional when delayed from getting to work by giant octopi, so imagine how they’ll respond if Hills were to park a truck carrying a large blowup Ralph Topping doll astride a railway crossing!