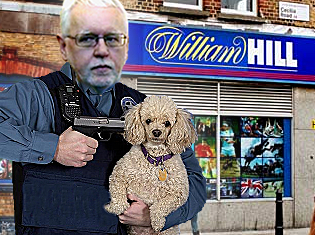 Apparently tired of being treated like the small burrowing mammal in a game of whack-a-mole, the heads of five of the UK’s top betting firms have penned a joint letter defending their right to open betting shops and to stock those shops with fixed-odds betting terminals (FOBT). On Saturday, the Telegraph printed a letter signed by William Hill CEO Ralph Topping, Ladbrokes CEO Richard Glynn, Gala Coral CEO Carl Leaver, Paddy Power CEO Patrick Kennedy and Betfred chairman Fred Done touting the implementation this week of a new Code for Responsible Gambling that includes “extra safeguards” on the use of FOBTs.

The Association of British Bookmakers’ new safeguards include enforced breaks with automatic alerts for both money and time spent. These alerts will be given to both customers and staff, with over 40k of the latter having been trained to spot symptoms of problem gambling as well as how best to approach customers displaying such signs. The five bookie bosses say they welcome the UK government’s call for an “evidence-based debate” on gaming machines.

Striking a respectful but slightly defensive tone, the letter-writing bookies noted that the “overwhelming majority” of their customers gamble responsibly. They also pointed out that the UK’s problem gambling levels are “low by international standards” and “have not increased since the introduction of gaming machines in betting shops or the inception of online gambling.” The claim is borne out by the UK Gambling Commission’s most recent gambling participation survey, which found a mere 1% of respondents had played FOBTs last year, the same figure as in 2012.

Topping subsequently told the Telegraph that the hysteria surrounding the FOBT/betting shop debate had blinded the ‘no’ side to the far-reaching consequences of getting what they want. Topping sought to remind them that retail betting levies help prop up the UK’s struggling greyhound and horseracing industries. Eliminate those sources of funding and Topping says “you might as well get the stun guns ready and start shooting the horse population and the greyhound population, because horse racing isn’t going to survive in its current form.”