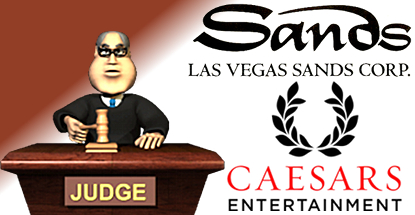 Caesars Entertainment suffered a legal setback on Friday after a federal judge dismissed the casino operator’s civil suit against Massachusetts Gaming Commission chairman Stephen Crosby. Caesars sued Crosby in December for allegedly scuppering their bid for a state gaming license in order to favor a rival bid by Wynn Resorts. In Caesars’ view, Crosby had made “untrue and misleading statements” regarding the casino firm’s tenuous links to Russian mobsters and the illegal online gambling history of Caesars Interactive Entertainment CEO Mitch Garber during his former role as CEO of PartyGaming.

On Friday, US District Judge Nathaniel M. Gorton said Crosby’s interference would indeed be an unconstitutional act if such interference had actually transpired. But Gorton said Caesars’ claims had only been reached “by assuming a series of improbable inferences, themselves resting on the shaky foundation of a number of naked assertions.” Gorton said the court “need not indulge in improbable conspiracy theories.” Stripping aside Caesars’ “sensational accusations,” Gorton found that Caesars had “simply alleged a violation of procedural due process that the court considers a close call.”

Crosby told the Boston Globe that Gorton’s ruling had vindicated his belief that the allegations against him were “specious.” Caesars CEO Gary Loveman said his firm “emphatically disagrees” with the ruling, which Caesars intends to appeal. Loveman said state residents “deserve to know the truth” about Crosby’s conduct and pointed out that Gorton had said “Crosby’s failure to avoid the appearance of impropriety” had caused the public to lose trust in the casino licensing process.

STEVE JACOBS’ DEFAMATION SUIT AGAINST SHELDON ADELSON GIVEN NEW LIFE
On the other side of the country, the Nevada Supreme Court has reversed a lower court ruling that dismissed the defamation suit brought by former Sands China CEO Steven Jacobs against Las Vegas Sands chairman Sheldon Adelson. Jacobs was fired from his Sands China position in 2010, prompting him to file a wrongful termination suit in which Jacobs alleged that Sands had engaged in numerous dodgy practices in China, including making illegal payments to win concessions from Chinese officials.

Jacobs added defamation to his list of grievances after Adelson gave an interview to the Wall Street Journal in which he claimed Jacobs was delusional and had used “outright lies and fabrications” in order to justify his lawsuit. Lower courts had agreed with Sands attorneys that these comments were protected by litigation privilege.

In a 4-3 decision, the Court rejected Sands’ argument and sent the suit back to Clark County District Court. Writing for the majority, Justice James Hardesty said the Journal didn’t have “any legal or financial interest in the underlying litigation” and thus Adelson’s comments fell outside the scope of legal privilege. Writing for the minority, Justice Michael Cherry said the intense media focus on such cases should afford defendants the right to publicly respond to allegations, because defendants are often judged “on the media’s portrayal of them during the proceedings.”