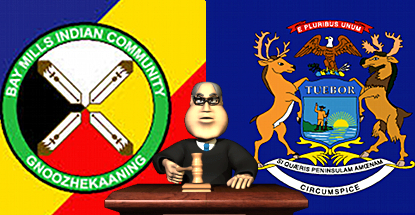 The concept of tribal sovereignty won a partial victory on Tuesday when the US Supreme Court ruled that the state of Michigan couldn’t sue a tribe for opening a casino off tribal lands. By a 5-4 ruling, the Court decided that Michigan lacked the authority to block the Bay Mills Indian Community’s 2010 launch of a small slots-only casino located near Vanderbilt, around 100 miles from Bay Mills’ tribal borders.

The casino was closed in 2011 after Michigan convinced a federal judge to issue an injunction preventing it from operating. A federal appeals court reversed that injunction on the basis that Michigan lacked jurisdiction to sue the tribe, leading Michigan to take the case to the Supremes.

Writing for the majority, Justice Elena Kagan said tribal sovereignty extended to off-reservation commercial activities. Michigan had claimed that the tribe was operating the Vanderbilt casino from within its tribal lands and the Indian Gaming Regulatory Act (IGRA) allowed states to sue tribes for violating the terms of tribal-state compacts. But Kagan found that this case didn’t involve gaming on tribal lands and thus fell outside IGRA’s parameters.

However, Kagan noted that unless federal law provided differently, Indian activity off the reservation is “subject to any generally applicable state law.” Kagan suggested that if Michigan wished to pursue the matter, it might do so by other means, possibly by denying the casino a gaming license. Then, if the casino went ahead and opened anyway, the state could commence civil or criminal legal actions against the responsible tribal officers for operating without a license.

Bay Mills had purchased the property on which its new casino stood with moneys obtained via a land claims settlement with the federal government, which the tribe believed transformed the purchased property into tribal territory. The Department of the Interior rejected this argument and the Court didn’t offer any opinion contradicting this rejection.

Bay Mills issued a statement saying it was “gratified that the Court reaffirmed [the] longstanding principle” of tribal sovereignty but offered no clues as to what steps the tribe might take regarding future off-reservation casino plans. Meanwhile, the Sault Ste. Marie Tribe of Chippewa Indians, which wants to open a similarly off-reservation casino in Lansing that Michigan is also seeking to block, says it is reviewing the Court’s ruling before weighing its next move. Gov. Rick Snyder’s office said it too was reviewing the decision but would “continue to litigate a number of the other issues surrounding this case.”