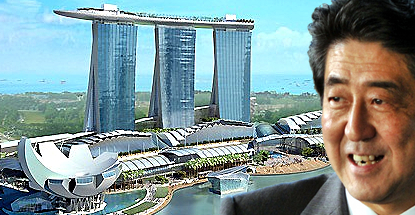 Japanese Prime Minister Shinzo Abe plans to visit a resort-casino in Singapore when he visits the city-state this week. Abe is set to deliver a keynote address at the Asia Security Summit in Singapore on May 30 and the Japan News reported that Abe intends to check out the jurisdiction’s two integrated resort casinos to see what all the fuss is about. Japan’s parliamentarians are racing the clock to see if they can pass their own casino bill before the current legislative session ends on June 22. Abe is reportedly keen on examining the measures Singapore has taken to mitigate the potential social costs of casino activity.

It remains to be seen whether Abe will pick up any pointers from Singapore’s approach to casino junket operators. The Casino Regulatory Authority (CRA) has been far stricter in its oversight of junket operators than their counterparts in Macau, currently permitting just three licensed ‘international marketing agents’ to ferry high-rollers into Genting’s Resort World Sentosa. Singapore’s other IR, Las Vegas Sands’ Marina Bay Sands, has yet to feel the need to officially engage any junket operators.

At the inaugural Japan Gaming Congress earlier this month, Melco Crown Entertainment’s chief of international marketing Kelvin Tan described the different approaches to junkets in Macau and Singapore as “two extremes of the spectrum.” Tan suggested Japan emulate the middle ground struck by Las Vegas and Australia, which utilized “genuine” junket operators from markets in which it wasn’t feasible for casino operators to establish their own marketing offices. (Tan went as far as to describe junkets as the casino industry’s “travel agents.”)

Steve Vickers, the former head of the Hong Kong police criminal intelligence bureau and currently heading his own risk mitigation firm, told JGC attendees that he doubted Macau junket operators would come to Japan in their present form. It’s worth noting that Vegas junkets operate on a commission basis, rather than providing credit directly to players. Less lucrative spoils and stricter oversight may help discourage many Macau junket operators from attempting to enter the Japanese market (when it finally opens).