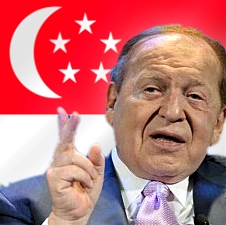 Las Vegas Sands Chairman/CEO Sheldon Adelson is making headlines with his suggestion that junket operators are already working in Singapore, despite the local government having yet to issue a license to any such operator. Adelson said he “quite accidentally” noticed a $5m money transfer between Macau and Singapore via Marina Bay Sands last November, and because it did not involve a known high-roller, Adelson claims to have immediately pegged the transactor as “obviously a junket rep.” Adelson subsequently issued instructions that the transaction be blocked, which he says was a major contributor to November being “a lower month” for Marina Bay Sands.

Speaking at the JP Morgan Gaming, Lodging, Restaurant & Leisure Management Access Forum in Las Vegas, Adelson said Sands chooses “to construe [Singapore’s] laws accurately and conservatively, and the law says ‘Thou shalt not do business with third parties that are not licensed’. So we’re not doing business with third parties, doesn’t mean one doesn’t slip through without our knowing about it. But we work hard to keep Macau-style junket reps out.” A spokesman for Singapore’s casino regulatory authority has announced plans to investigate Adelson’s claims.

Adelson also provided details on the ongoing investigations into his company’s relationships with Macau’s junket operators. Adelson admitted that junket operators “own Macau,” but suggested that many of them are “very nice guys” with whom he wants “a warm and fuzzy relationship.” Adelson expects the Securities Exchange Commission probe to last four to six months, but he’s having some difficulty providing some of the data the SEC is seeking, such as his emails. Adelson claims to be something of a Luddite, in that he doesn’t have a computer. “I’m not an email kind of person.” (Yeah, he’s clearly much more of a MySpace fan.) Regardless, Adelson is adamant that the investigations are much ado about nothing and that “when the smoke clears … I’m 1,000% positive that there won’t be any fire below it.”

That hasn’t mollified a group of disgruntled Las Vegas Sands shareholders who are suing LVS’ board of directors in a Nevada court for breach of fiduciary duty, abuse of control, waste of corporate assets and conspiracy. The shareholders claim they were “kept in the dark” about Sands’ relationships with junket operators and “the precise nature and scope of the company’s possible liability” vis à vis violations of the Foreign Corrupt Practices Act.

Despite these examples of the dark side of public markets, MGM China Holdings is forging ahead with plans to make its initial public offering on the Hong Kong stock exchange in mid-May, especially now that the recent Stanley Ho family squabble appears to have been resolved (again). MGM China is a joint venture between Ho’s daughter Pansy and MGM Resorts International. MGM China hopes to raise $1b via the IPO, but who knows what will happen if competitors – who have in the past accused MGM of boosting its market share by overpaying Macau junket operators to lure more high rollers to MGM’s door – suggest regulators have a look at MGM’s emails.