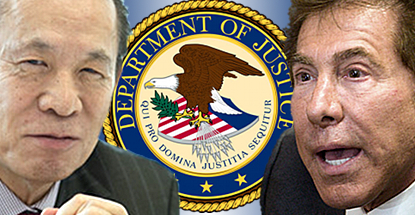 Wynn Resorts boss Steve Wynn had had a couple busy days in court. On Thursday, a three-justice panel of the Nevada Supreme Court upheld the $7.5m judgment Steve was awarded in 2012 after winning his defamation suit against Girls Gone Wild founder Joe Francis. The pair began publicly hurling mud at each other a couple years earlier after Francis refused to honor a $2m marker he’d run up at Wynn’s Las Vegas properties, leading Francis to claim that Wynn had threatened to bury him in the Nevada desert. Wynn has subsequently been awarded a further $40m in compensatory and punitive damages by California courts in a separate slander case involving Francis.

Francis had sought to set aside the $7.5m judgment on the grounds that his attorneys had bailed on him – along with (presumably) Francis’ former bevy of drunk co-eds – leaving him unable to defend himself. Bollocks, said the Nevada panel, noting Francis’ numerous attempts to forestall his need to pony up Wynn’s money. Girls Gone Wild filed for bankruptcy last March, claiming less than $50k in assets and untold kajillions in liabilities.

DOJ LOSES BID FOR FURTHER DELAY IN WYNN V. OKADA SUIT
On Friday, Wynn learned that the never-ending civil proceedings between his company and Universal Entertainment boss Kazuo Okada will finally go ahead in Nevada state court. Okada and Wynn have been locked in a legal death grip ever since Wynn forcibly redeemed Okada’s significant Wynn holdings at a steep discount in February 2012 on the grounds that Okada allegedly bribed Philippine gaming regulators in order to boost his efforts to build a resort casino in Manila.

Last April, the US Department of Justice intervened in the case, requesting a stay of discovery while it investigated Okada’s US subsidiary – through which the alleged bribes were made – for possible violations of the Foreign Corrupt Practices Act. Clark County District Judge Elizabeth Gonzales approved the six-month stay and a second stay when the first expired. But Gonzales now says she’s “tired of waiting” and will let the second stay expire on May 5. Gonzales did throw the DOJ a bone by granting their request to redact the names of all those cooperating with the DOJ’s investigation from the court files.