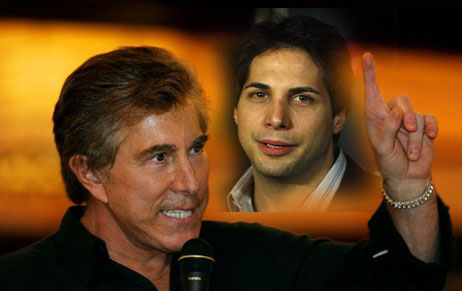 Girls Gone Wild owner Joe Francis’ endless stream of lawsuits against Steve Wynn have come to an end with the former having to cough up $7.5million. Clark County Judge Mark Denton handed over the dough after a “prove-up hearing” (held before a judge in uncontested lawsuits) took place this week at which the eventual Wynner testified.

The money relates to a defamation squabble between stemming back to Francis’ failure to pay a $2m marker at one of Wynn’s casino. Does Stevo not know how many drunken college girls are callin’ him 24/7?! Have some manners!

Francis’ marker at Wynn’s casino led to a criminal case being launched and subsequent comments meant a defamation case dragged out through the courts.

The press release stated “Wynn Las Vegas will continue its efforts to identify and attach assets of Mr. Francis to satisfy both judgments.” Francis’ total bill includes some $2m plus interest and fees he still owes following a Nevada courthouse judgment related to the original marker. Should have just called it quits and sauntered off with ya Viagra, Joe!

MGM’s joint venture with Pansy Ho, MGM China, posted its highest stock price in five months. Shares in the Macau-facing casino business rose 6.6% to close at HK$13.82 on the first day after MGM Holdings released impressive results. It means shares in the firm have jumped by 36% in 2012 so far.

Las Vegas won’t hit its 2007 peak of $6.8billion gross gaming revenue for another two years. Global Betting and Gaming Consultants (GBGC) reported that whilst the recovery is underway it’d be some time until they reach the high levels of the noughties.

“The recovery started toward the end of 2009. In spite of a 9 percent uplift from 2009 to 2011 Vegas has a long way to go and on current growth rates and the prospect of some Federal budget balancing after the Presidential election we predict that 2014 will be the year when Vegas is back to where it was in terms of revenues from gambling” said Warwick Bartlett, GBGC chief executive.