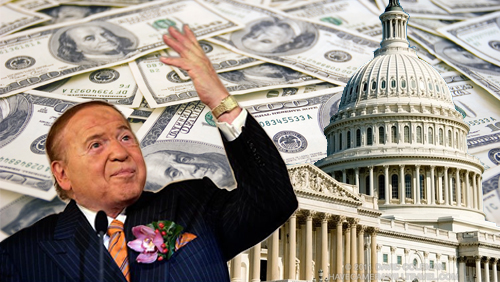 Sheldon Adelson’s money has managed to push an anti-online gambling bill all the way to the halls of congress and the senate as State Senator Lindsey Graham and Congressional Representative Jason Chaffetz introduced legislation to reverse the DOJ’s 2011 decision to allow the expansion of online gaming in the United States.

If anybody wondered just how far Sheldon Adelson’s money could push his fight to ban online gambling then you had better keep reading.

Legislation to reverse the Department of Justice’s 2011 decision to unilaterally expand online gambling is currently sitting on the desks of Congress and the Senate.

Sheldon Adelson is the biggest threat to online gambling since the Unlawful Internet Gambling Enforcement Act (UIGEA) was smuggled onto the SAFE Port Act back in 2006.

Superman has lasers shooting out of his eyes, Spiderman can shoot webs, Wolverine has claws made out adamantium, and now we have Adelson and his silent but deadly bricks of green.

And those bricks of green could effectively shut down all the progress made by Nevada, Delaware and New Jersey, effectively muzzling the excitement before it has even had chance to the hit the flop.

Will they reverse the DOJ’s interpretation?

Not according to most industry experts.

But that’s not really the point is it?

The legislation is there. It’s arrived. Signed, sealed and hand delivered by the South Carolina Senator Lindsey Graham. People sometimes wake up on the wrong side of the bed, but this guy seems to have woken up in a parallel universe.

With some objections to a 2010 online poker bill aside, Senator Graham has no history of opposing any federal, or state, moves to introduce online gambling into the great U S of A.

New Jersey made it a threesome…not a peep.

Just when exactly was Senator Graham going to remind the world of his virulent opposition to online gambling?

And what is happening right now?

Senator Graham is up for re-election in conservative South Carolina, and these things cost a lot of money.

Now who do you think is the single largest publicly known financial backer of political interest? Who gave $93m to Republican candidates during the 2012 presidential elections, and has vowed to spend even more during the elections of 2016.

The super villain who shoots green lumps of cash out of his fingernails. Lumps of cash that were taken from the pockets of humans, who walked into his casinos, gambled and lost.

The same super villain who created the Coalition to Stop Internet Gambling (CSIG), and has vowed to do whatever it takes to put a stop to an industry he believes is ‘fools gold’ is a ‘cancer’ and a ‘train wreck waiting to happen.’

Darryl Nirenberg, a man who lobbies for Adelson’s Las Vegas Sands Corporation. The same man who has also written a piece of legislation opposing the same alleged wire act transgression for Utah Senator Jason Chaffetz. A bill that is also eerily similar to that of Graham and the CSIG.

And where is Sheldon Adelson whilst the future of online gambling rests in the hands of US politicians. He is busily preparing to sweet talk four potential candidates for presidency at his aircraft hangar in Vegas…over a poker game no less!

And guess whom Adelson and his wife Miriam held a fundraiser for last year.

The only thing that gives this bill any semblance of credit is the fact that it stinks so badly that there is no way a set up like this could be true?

And this is what is the most terrifying for those of us who rely on an online gambling infrastructure to pay our bills.

Sheldon Adelson has the skin of a rhino and it seems to be hardening with age. This is a man who doesn’t like to lose. He is a natural born winner. You don’t become the 8th richest person in the world by losing.

It doesn’t matter that the proposed legislation will contain enough caveats to keep horse racing and the lottery business in tact. It doesn’t matter if the bills are quite obviously put together from the fingertips of the puppets whose arseholes Sheldon Adelson’s arm now resides.

All that matters is money talks and some politicians are becoming very familiar with the conversation.