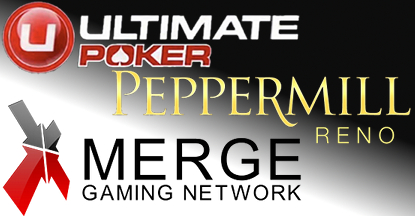 Online gambling operator Ultimate Gaming has struck a deal to allow Reno’s Peppermill Resort Spa Casino to piggyback on Nevada-licensed online poker site Ultimate Poker. Ultimate Gaming, which operates under the Fertitta Interactive/Station Casinos umbrella, has reached a deal that will allow Ultimate Poker players to make deposits and withdrawals at the Peppermill and its four other northern Nevada properties. In addition to its flagship Reno venue, Peppermill also operates the Western Village Inn & Casino in Sparks and the Rainbow Hotel Casino, Peppermill Hotel Casino and Montego Bay Casino in Wendover.

The deal has yet to receive the blessing of state regulators, but Ultimate Gaming CEO Tobin Prior claimed to be “very excited” to tap into Peppermill’s “extensive customer database.” Ultimate Poker was the first site to launch in Nevada’s regulated online poker market last April but has lagged Caesars Interactive Entertainment’s WSOP.com, which launched five months later. A third site, South Point’s RealGaming.com, made its debut late last month, which will finally allow regulators to break out online poker revenue into a separate column in their monthly revenue reports.

Merge already restricted players based in Kentucky, Louisiana, Maryland, Missouri, New York, Utah, Washington and the District of Columbia. The Nevada exit follows a decision in January to block players from New Jersey and Delaware, the only other two US states currently offering real-money online gambling other than horseracing. But similar to that announcement, the prohibition is not network-wide, as PokerHost – which uses a separate cashier from the Jazette sites on Merge – continues to say it’s business as usual.