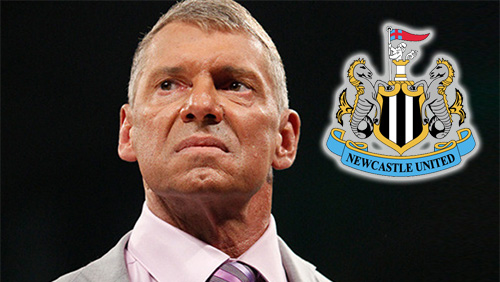 Rumors are rife that the World Wrestling Entertainment (WWE) owner Vince McMahon could be preparing a bid to take Newcastle United Football club off the hands of owner Mike Ashley.

World Wrestling Entertainment (WWE) owner, and Mike Sexton lookalike, Vince McMahon is reportedly interested in buying Newcastle United football club from the Sports Direct owner Mike Ashley in a bid to grow the WWE brand this side of the pond.

The news has surfaced through Winner Sports where it claims that the 69-year old billionaire is an avid fan of the Barclays Premier League (BPL) and is extremely interested in becoming the latest in a long line of Sugar Daddies to take ownership of a BPL club.

A Newcastle United source told Winner Sports: “Vince McMahon has been sniffing around the club and seems keen on pursuing his interest.

“He sees England as an untapped market for his wrestling empire. He has even indicated he could put on wrestling bouts at St James’s Park.

“Obviously it is very early days but there is hope the fans may get what they want with Ashley leaving. Buying a club like Newcastle would throw him into the spotlight in England which is just what he is looking to do.”

Perhaps McMahon watched former Newcastle United players Lee Bowyer and Kieron Dyer’s infamous punch-up back in 2008 and has somehow gotten the wrong end of the stick?

PaddyPower are having some fun with the news after launching a series of speculative bets.

If the deal does go through then Newcastle’s long suffering fans could have good reason to celebrate, as it is extremely likely that the Ameobi brothers will team up to take the tag team titles off The New Age Outlaws to give the Magpies their first piece of silverware since they won the joke Intertoto Cup back in 2006.