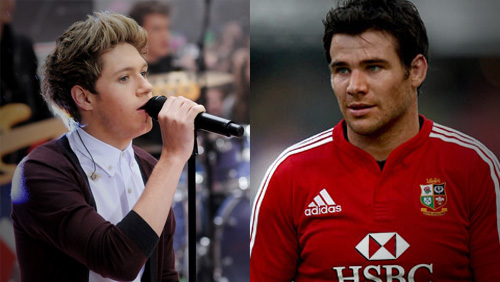 Paddy Power are at it again with a projection ripping the Michael out of Joe Kinnear; an offer of €50k for 1D star Niall Horan and Welsh Rugby Star Mike Phillips to get it on, and Aspers Casino try and fail to follow their lead.

The ‘taking the piss’ department of Paddy Power were at it again this week when they poked fun at the former Newcastle United, Director of Football, Joe Kinnear, in the run up to their home match against Tottenham this week.

The conquistadors of gambling comedy hurled a giant projection of Joe Kinnear onto a building near St James Park with the words, “Kinnear out on a free, who said he couldn’t DO GOOD BUSINESS?’

The projection was then moved onto the St James Park structure, and PaddyPower then distributed it via Twitter citing.

“His final act at the club was probably his most productive. Be thankful Newcastle fans,” alluding to the fact that Kinnear resigned from his position after bringing just two loan signings to the club in his seven months of employment (Loic Remy and Luuk de Jong).

His final act at the club was probably his most productive. Be thankful Newcastle fans… #BallofShame #NUFC pic.twitter.com/m7BkOjUzuZ

That’s a question that Paddy Power are also wondering hence the following tweet.

Hey @NiallOfficial fancy getting into the boxing ring with @mikephillips009? We’ll give the winner €50k for charity & the loser €10k!!

Paddy Power presented the offer to the two celebrities as a honorable way to end their Twitter spat after the One Direction star called Phillips a ‘vicious idiot’ after Wales’ recent Six Nations defeat to Ireland.

Phillips returned a volley by asking Horan to pay him a visit at a Welsh training session and to ‘bring the rest of The Beatles with you.”

Can the Welsh rugby star ruffle the perfectly primed quiff of the One Direction star?

Paddy Power have offered to give €50,000 to the winner’s charity of choice, and a further €10,000 for the runner-up. They have even asked the Ireland full back Rob Kearney to act as the guest referee as he stuck up for Horan during the Twitter war.

Aspers do a Paddy Power…Very Badly

I can just imagine the board room at Aspers Casino.

“Look…profits are just not good enough, player numbers are plummeting through the floor, and I am at a loss. What are the other gambling companies doing to attract attention?” Asks COO Richard Noble.

“Well we could introduce better games, more entertainment, lower food and drinks prices, perhaps give alcoholic drinks away for free if you are playing?” Says a marketing bod.

“Well Paddy Power seem to do well and all they do it shine offensive projections onto buildings.”

“That’s a fucking great idea. I want an offensive projection shone onto a building before sun sets.”

And so off they went…

Except the priest in charge of the All Saints Church in Northampton, where Aspers shone a 30ft projection of a semi-naked model in a bid to promote their strip poker night, didn’t take too lightly to the stunt.

Father David McConkey said he was ‘Offended that this was done,” and that, “no permission was sought or gained. We would be grateful for an apology for this misuse of a sacred space.”

Well when the big hand reached 12 it vanished into the model’s sacred space so I am not quite sure McConkey is right on the money with his opinions.

Back to the drawing board then.