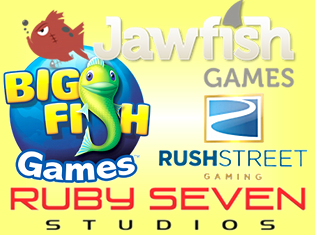 Seattle-based social games developer Big Fish Games says it earned over $266m in gross revenue in 2013, its 11th consecutive year of double-digit growth. Big Fish CEO Paul Thelen credited its Big Fish Casino and Fairway Solitaire products as being largely responsible for 2013’s success. Big Fish Casino – which also offers real-money gambling in the UK with the help of Betable – not only earned top-ten grossing app honors from Apple, it was the only social casino product to appear on Apple’s top-grossing lists for both iPhone and iPad. Big Fish Casino enjoyed 250% growth in 2013, while Fairway Solitaire grew over 100% to become the year’s top-grossing solitaire app.

Things are far less rosy for another Seattle-based social gaming outfit. Geekwire reported that Jawfish Games is in the process of “wrapping up operations” after an unnamed “local” game company backed out of a deal to acquire Jawfish for $20m. Poker pro Phil Gordon, who headed the Seattle startup, informed staff of their immediate layoffs after explaining that the company had burned through all its remaining cash on legal fees associated with the failed acquisition. According to Gordon, the “acquirer then knew we were broke and couldn’t afford to sue, so they refused to pay the break fee. Classy.”

Jawfish may be gone, but other social casino startups are keen to fill the void. BIGMAN Entertainment has just launched a staggered rollout of its BIGMAN Slots on Facebook. The game is currently available only in five countries: Canada, New Zealand, Singapore, Sweden and the United Arab Emirates, with a global launch planned for later this year. The company, which was founded in California but also has offices in South Korea, plans to issue “many upcoming social casino titles” at some unstated future date.