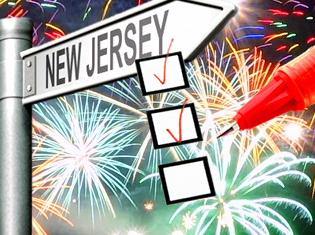 Christmas came early for New Jersey’s online gambling hopefuls as the state’s Division of Gaming Enforcement (DGE) released lists of the companies granted the first transactional waivers (TW). Possession of a TW will allow a company to participate in the state’s online gambling market – which officially opens Nov. 26, following a five-day test period – while the DGE completes its full investigation of the applicant. The first batch of TW’s issued to Atlantic City casinos and their online gambling partners reads as follows:

A second list of companies have been deemed “eligible for the issuance” of a TW. These companies are “currently authorized to engage in internet gaming related business transactions once they enter into an agreement with a casino licensee or platform provider and petition the Director of the Division for a Transactional Waiver.”

NOTABLE NAMES
Much of today’s news has focused on the absence of PokerStars from either of the DGE’s lists, but early reports by poker writer Wendeen Eolis that Stars’ gaming license application had been rejected were not supported by the DGE, which issued a non-committal statement that Stars’ application “remained under review.” Stars spokesman Eric Hollreiser subsequently tweeted that the company’s application “remains under review by NJ Division of Gaming Enforcement & we remain committed to working with them to complete the process.” The DGE is promising to release the next batch of TW’s next Friday (15) as 12pm EST.

The other big news from Friday’s announcement is the fact that the past activities of Bwin.party’s current and former top execs weren’t sufficient to queer their bids. Ryan used to run Excapsa, the parent company of online poker site Ultimate Bet, which – like PokerStars – continued to serve US customers post-Black Friday. (Paul Leggett, former UB exec and current chief of Amaya’s online operations, apparently also received a pass.)* Current Bwin.party CEO Norbert Teufelberger is still facing criminal charges in France relating to Bwin’s unauthorized dealings with French customers. Caesars Interactive Entertainment was also approved despite CEO Mitch Garber’s history as CEO of PartyGaming during its US-facing days, a legacy recently cited by gaming regulators in Massachusetts as justification for rejecting Caesars Entertainment’s bid to build a casino near Boston.

* UPDATE: Late Friday, USPoker.com broke the news that Legett has left Amaya. Legett’s role as VP of online will be assumed by Amaya biz-dev director Don Jacques. Similar to the PartyPoker founders’ recent decision to sell their Bwin.party holdings, Leggett’s departure was reportedly intended to eliminate any hurdles his past involvement with UB might have posed to Amaya’s New Jersey hopes.

ALSO…
Friday also brought news that Ultimate Gaming and Bwin.party have joined the ranks of New Jersey-facing online sites inviting players to sign up with their respective offerings. Ultimate has launched Ucasino.com, while Bwin.party has debuted PartyPokerNJ.com.

Finally, a federal judge has approved a request by the Atlantic Club Casino Hotel to continue operating while it sorts out its financial affairs. The struggling casino filed for Chapter 11 bankruptcy protection earlier this week, citing $5.5m in debts to creditors and an $32m unfunded pension liability. Judge Gloria Burns has approved a plan by which the casino’s owners, Colony Capital LLC, can begin accepting offers to buy the casino on Nov. 18, but a buyer must be found by mid-December and the deal must be closed by mid-February. The Atlantic Club infamously reneged on a deal to sell itself to PokerStars earlier this year, and the two companies are still locked in litigation over the $11m Stars advanced the casino in good faith.