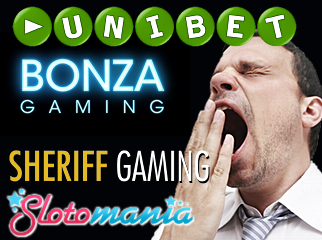 Malta-licensed online gambling operator Unibet has taken a 45% interest in Bonza Gaming, the social gaming outfit founded last year by Plumbee Limited and Sportingbet. Unibet’s stake in Bonza will come as the result of its 100% acquisition of Social Gambling (Channel Islands) Ltd., a shell company whose sole reason for being is housing Sportingbet’s share of the Bonza biz.

Bonza, which holds a B2C gambling license issued by the Alderney Gambling Control Commission, released its first real-money gambling social slot (the imaginatively titled Bonza Slots) on Facebook last month. Unibet is paying a mere £100 up front for the acquisition, but has agreed to provide a £2m loan to keep Bonza’s lights on until the non-virtual money starts rolling in. The conditional deal is still subject to regulatory approval.

ONLINE GAMBLING ‘AS EXCITING AS WATCHING QVC’
Jawfish Games creative director Tadgh Kelly isn’t buying such ‘another level’ humble-brags. Kelly recently penned an op-ed for TechCrunch in which he lambasted real-money online gambling as boring and “the least innovative sector of the games industry.” (Shades of Betable CEO Chris Griffin’s observation that online gambling companies relied too much on minor tweaks of century-old products off the gaming floor.) Kelly believes “games are an entertainment business like TV where the fiction and the mechanic are just as important as one another, but online gambling comes across as about as genuinely exciting as watching QVC.” Ouch.

Kelly believes the lack of innovation in game design means “the race to win online gambling is only about marketing spend and distribution.” As such, when online gambling (not just poker) does come to the US in a big way, ‘the gold rush will quickly go to whoever can afford to compete.” Kelly is still waiting for some gambling company to invent a truly new game that isn’t “some adaptation of an existing game, some recasting or re-theming of stuff we already know.” Kelly believes the future of gaming “is all about surprise,” not something “1% different from everything I’ve seen before.” Consider the gauntlet thrown, then?