Betfair and Monmouth Park, New Jersey, are closing in on an exchange betting deal that cast the pair as pioneers in U.S racing history.

It was Christmas Eve that we broke the news that the iconic Hollywood Park was going to sell out and be mowed down to become a new housing development. 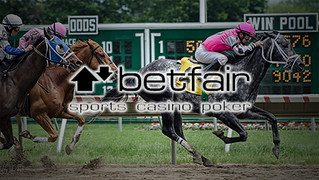 The effect of the closure was also felt in the British Isles, as the racetrack was under the sponsorship of the landmark betting exchange Betfair. Not one to mope around, the outfit that likes to offer people the opportunity to get laid, has jumped back on the horse, and found another U.S horse racing business partner in Monmouth Park, New Jersey.

The duo have reached a tentative agreement that will see Betfair offer exchange wagers at the beginning of the tracks race meets in May. If the tentative can be turned into firm, it will represent the first exchange betting offering in the United States.

As one would expect the news has brought mixed reaction with supporters of the business believing it could lead to a boom, and anti-gambling songsters screaming from the roof tops that hells gates will be opened and Beelzebub’s children will be set free to open our chest cavities with a rusty spoon.

New Jersey’s racing industry is currently in a state of flux. Only one casino in Atlantic City offers a racebook, whilst both Monmouth and Meadowlands are seeking approval to install racing type slot machines into their establishments in an urgent need to find more revenue.

Betfair owns Television Games Network (TVG), an American horse racing channel that features race analysis, interviews, handicap tips and anything else of an equine nature; and it used this foundation to successfully lobby for exchange wagering to be legalized in the state back in 2011.

The proposals for exchange betting are currently in the hands of New Jersey’s attorney general’s office, and if approved will be posted for a 60-day public comment period before the racing commission casts the final vote.

“We think it’s going to be a brand new business for us, “Dennis Drazin, Chairman of the horseman-owned company that operates Monmouth Park, told the Racing Daily Form.

We will bring you more on this story as it develops.

Shareholders of Betfair stock are going to have a late Christmas present as the company declared its intention to pay shareholders a dividend of GBX 6 ($0.10) per share on Friday, January 17th.

The news comes as Credit Suisse downgraded its rating for the betting exchange from ‘outperform’ to ‘neutral’ after the stocks recently strong showing.

“Last month’s H1 underlying earnings were slightly ahead of expectations, providing further evidence that the turnaround is on track,” the bank said in a statement. “However, the shares have performed strongly, and the inclusion of start-up losses related to the US and Italy, combined with lower pricing expectations, reduces our target price to 1,085p (from 1,185p).”

The bank continued by saying that Betfair still had work to do to integrate the sportsbook with its betting exchange and this presented a ‘significant execution risk’.