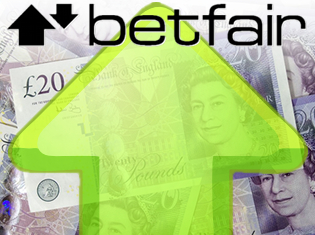 The revenue slide is attributed to CEO Breon Corcoran’s late-2012 decision to curtail operations in grey markets like Germany, Greece and Cyprus. Betfair now derives 77% of total group revenue from ‘sustainable’ sources, i.e. regulated markets such as the UK, Ireland, Denmark and the US, up from 71% at this point last year. The ranks of active customers in sustainable markets rose 28% to 393k while actives in other markets fell 19% to 147k. But despite all those extra customers, revenue in sustainable markets rose just 1% while other markets fell 26%.

Betfair’s UK & Ireland customer base grew by 25% in H1, with new customers up 77% since last year. The company hopes to build on this momentum with a £100m sales and marketing budget this year. Betfair’s decision to put so much emphasis on its home market could weigh heavily on the company’s results when the UK government imposes the controversial 15% point-of-consumption tax (POCT) next year. Had the POCT been in place in H1, Betfair estimates it would have amounted to £17m in extra costs.

Revenue at Betfair’s core exchange betting product fell 7% year-on-year to £122.5m, but fixed-odds sportsbook revenue rose 39% to £11.4m. Betfair’s new traditional sports betting vertical was responsible for 32% of new customer acquisitions in the UK and Irish markets. Corcoran said 38% of Betfair’s sports betting customers use both exchange and fixed-odds wagering products while 30% are exchange-only and 32% sportsbook-only. Corcoran said he continued to see evidence that the two products are “complementary.” Mobile revenue rose 71% and accounted for 57% of all sportsbook revenue in October compared to just 43% in May.

Betfair’s casino gaming revenue fell 25% to £29.2m, dragged down by a 48% decline in unregulated markets, but even those sustainable markets saw a 10% falloff in gaming revenue. The “very weak” poker vertical slumped 60% following the shift from the Ongame network to Playtech’s iPoker and now accounts for a mere 2% of overall revenue.

Betfair’s US business via the TVG horseracing operation saw gains in both handle (32%) and revenue (17%) in constant currency terms thanks to the launch of advance deposit wagering in New Jersey. Unfortunately, Tuesday brought news that US telecom firm AT&T had dropped the TVG channel from its U-Verse cable package. AT&T spokesman Mark Siegel said AT&T wasn’t able to reach “mutually beneficial terms” with TVG “despite our good faith efforts.”

Last week’s launch of the BetfairCasino.com online gambling operation in New Jersey and the company’s entry into the Italian market are expected to cost the company a combined £10m. While the New Jersey site has only been active a week, Corcoran said the initial signs had been promising. Betfair is currently fine-tuning the debut of its exchange betting product in Italy, with a launch expected in fiscal Q4 following the “final stages of a rigorous testing process.”

Betfair is forecasting full year earnings of between £82m-£87m and closed out H1 sitting on a cash pile of £171.3m and no debt. Betfair stock ended Tuesday’s trading at £10.80, a significant improvement over the £6.70 figure it held at the start of 2013, but still well off £13 initial public offering price in Oct. 2010 and just two-thirds of the £15.50 peak the stock hit shortly thereafter.