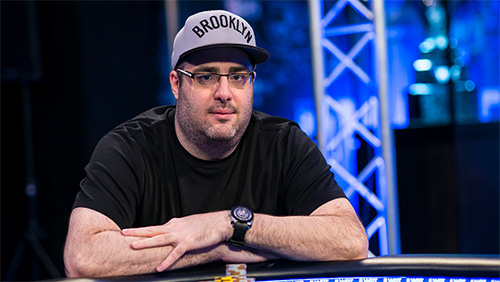 Jared Jaffee has been in the game a long time, and has been in some close scrapes, but he has never felt the surge of emotion that’s associated with claiming one of the biggest titles in the game.

Perhaps, this is the New Yorkers time, as he heads into the final table of the Jacksonville Fall Poker Scramble with more chips than anyone else and all of the experience.

12-hours before the name of Jaffee was sent to poker news outlets around the world, there were 26 players left in the field.

Let’s find out what happened to them shall we?

There was a rash of eliminations in the first level of the day.

Jacqueline Scott (26th) and Andrew Johnson (25th) found the door before Blake Purvis eliminated Stephen Bokor 44 v AT. Then Tim Miles quickly followed him into the sunlight after he got it in on Js9c6c in a hand with Matt Glantz. Miles was holding Jh7h for top pair but Glantz had him dominated holding AdJc for the better kicker; neither the turn or river could help Miles and he was out in 23rd spot.

The last exit of the level belonged to Robert Stevanovski who ran AK into the pocket tens of Jeff Madsen and the board remained aceless, kingless and anythingelseless.

Level 21: The Chip Leader Cong Pham is Out

It comes to the life of every professional poker player. A day when you would rather not talk about it and instead wish it never happened. That’s exactly what happened to the chip leader Cong Pham. He came into the third day of action full of confidence but then lost nearly every hand he played. His exit came when he moved his short stack into the middle from the small blind holding ten-nine, and was called by Matthew Oswalt holding queen-nine. A queen on the river confirming things, but Pham would rather we didn’t talk about it.

Alexander Ziskin then eliminated Tom Sheets after the latter moved all-in on JhTc5hQc holding QTdd, for top pair, and Ziskin called holding Q8hh for top pair with the flush draw. The 4h hit the river to hand Ziskin the flush and Sheets was crumpled.

It was a tough deal for Billy Swaringen who exited in 19th place. Swaringen finding pocket aces, and a willing participant to play for stacks holding pocket kings in Andrew Whitaker, the man who wa behind screamed for a king and the dealer duly delivered to send Swaringen sinking.

Jacob Bazeley was one of the favorites when the action started but would have to settle for an 18th finish. Bazeley called a shove from Oswalt on an ace high board holding a pair of aces. Oswalt turned over a double gutter and got there on the river.

Then we lost Paul Balzano in 17th spot when he moved all-in on Td8s5c holding Ad9c, for ace high, and Ryan Eriquezzo called with A8hh for middle pair. A third eight hitting the turn to seal things for the WSOP bracelet holder.

George Lampert moved all-in on a low board holding pocket jacks and was called by David Diaz holding pocket kings. The kings held and Lampert was the 16th place finisher. Then the tournament got a whole lot easier when the multiple WSOP bracelet holder Jeff Madsen exited in 15th when he ran his AQdd into the pocket aces of Blake Purvis.

Matthew Oswalt continued to take people out for fun. This time Derahn Sikes getting his pocket jacks stomped all over by pocket queens, and Andrew Whitaker missed his flush draw against the set of Randall Price to find an exit as unlucky number 13.

Level 23: Glantz and Ziskin Are Eliminated

Another deep run saw Matt Glantz finish in 12th spot after running ace-deuce into the pocket treys of Corrie Wunstel, and Alexander Ziskin was out in 11th when he ran A5 into T9 – blind on blind – only to see a nine on the flop to hand all of his chips to Thad McNulty.

Thad McNulty couldn’t build on the elimination of Ziskin when he excited in 10th. It was beauty versus beauty as the JThh of McNulty failed to find a flop, turn or river that could beat the KQcc of Jared Jaffee

The WSOP bracelet holder Ryan Eriquezzo was out in 8th place when he ran pocket sevens into the AQss of Jaffe. An ace on the flop sorting out that argument, before Margo Costa ended the good run of Matthew Oswalt when her ace ten outlasted the QTdd for Oswalt, when all the screaming in the world could not extract the right cards from the deck.