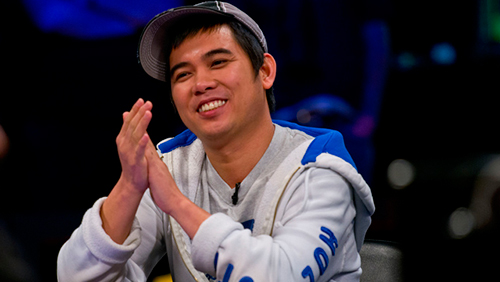 With the cream of the professional playing community having fun in the sun on the islands of St Kitts and St Maartens, you would think that the WPT is spreading itself a little thin.

With 358 players contributing to a $1,145,600 prize pool in Jacksonville, it seems the WPT has a little of something for everyone. With 26 players left the poker news outlets have the Borgata Poker Open third place finisher Cong Pham’s name up in lights, as he is looking most likely to take down the first prize of $252,749 and all the trimmings.

143 entrants waded through the doors on Day 1A and it was Cong Pham who would end the day as the chip leader with 46 of those players making the Day 2 seat draw. The second starting flight predictably drew in a much larger field of 215 players, and it was the World Series of Poker (WSOP) bracelet holder Ryan Eriquezzo who had the chip lead with 77 players remaining.

All that meant that 123 players started the second day of action and here are the highlights in a very small nutshell.

WPT Champions Club member Shawn Cunix was one of the earliest eliminations when he ran his short stack and ace-five into the solid looking pocket nines of Narendra Banwari, and the in form David Peters would eliminate Dennis Bergeron AQhh v AJdd on 7c6h2h when all the money went in and the IveyPoker Pro rivered a flush.

Matt Glantz is a commonly heard name once the major tournaments get down and dirty and he eliminated Praveen Taragaturi AK v AJ, before we lost Lily Killeto at the hands of Ben Allen when his pocket fours dodged all sorts of land mines against AQ.

David Diaz earned his first of a multitude of double-ups when his KQ outran the A9 of Blake Purvis. The latter would flop an ace, but Diaz would river a four-flush in his first of many Lazarus style performances.

Then before we headed into the 16th level Cong Pham started to flirt with the top spot after eliminating Scott Mauer 99 v AK when the money went in on Tc9c6s, with Pham holding a set.

Pham was at it again when the scalp of Evan Teitelbaum was added to his belt. This time Pham needed lady luck on his side as his pocket jacks looked in a world of hurt against the pocket queens of Teitelbaum; but Pham would river an unlikely looking straight to take the pot.

Jacob Bazeley has all of the tools necessary to become a WPT Champions Club member and he eliminated Peter Vitantonio on JT3 after his open ended straight draw got there on the river against his opponents pocket Kings.

Then as we approached the money bubble David Diaz doubled through John Holley QT v AK with a queen on the flop and ten on the river handing Diaz two pair, and Byron Kaverman doubled through Randall Price QQ v 77.

The poor unfortunate sap that was crowned bubble boy was Fletcher McKinney who was eliminated by Matthew Oswalt QQ v KK to deliver everyone an early Christmas present of $6,329.

Byron Kaverman just scraped across the line before being eliminated first, and there will be a new WPT Champions Club member after the last remaining member, Tony Ruberto hit the rail in a hand against Jake Schwartz: KQ v 44 all-in pre.

David Diaz finished the day with three double ups including a 66 v AA hand against Jared Jaffee when he flopped a set, and A4 v AT when he rivered a four.