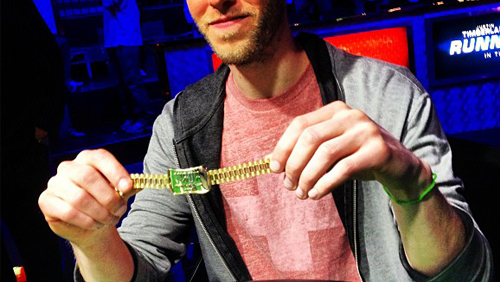 There are few people who have burst onto the world poker scene like Jeff Madsen did back in 2006. Two WSOP bracelets in No-Limit Hold’em (NLHE) events supported by a third place finish in both Omaha and Seven-Card Stud Hi-Low events, were the first four live cashes recorded on the rookie’s resume. That $1.5m in prize money earned Madsen the honor of the WSOP Player of the Year (POY) but he has had to wait seven years to get back to WSOP winning ways.

Madsen has just taken the top spot in Event #35 $3,000 Pot-Limit Omaha (PLO) to earn his first non-Hold’em bracelet. He defeated 639 other players to take the $384,420 in prize money after pipping Douglas Corning to the post in heads-up action.

“It was a great day. The tournament overall was very smooth. PLO is a very fun tournament and when I needed to win key hands and situations I did.” Madsen told the PokerNews sideline reporter Lynn Gilmartin after his victory.

Madsen is not a PLO player, but he is a fundamentally sound poker player, proving once again that having solid basics means the top players can adapt to any type of game. Madsen was spurred on to victory by the presence of his family who had flown to Vegas to surprise him on his big day.

The former Irish Open winner, Kevin Vandersmissen, worked wonders to be the last man standing at a table that included Aaron Jones, Jesse Sylvia, Amanda Musumeci and Max Lykov; as the final 120-players at Event #36: $1,500 NLHE Shootout reached a final day of 12. Vandersmissen is aiming to follow in the footsteps of his fellow countrymen Davidi Kitai and Michael Gathy who have both won WSOP at this years series.

The Shootout format is always one where the tournament is guaranteed to get that much tougher towards the end, and this event is no different. Vandersmissen being joined by Nacho Barbero, Simeon Naydenov, Salman Behbehani and Mike Watson in the final days play.

Dandruff is All Over Event 37

170-players decided to participate in the more chilled out version of Hold’em – Event #37: $5,000 Limit Hold’em (LHE), and 12-players advance into the final of day of action with Todd “Dandruff” Witteles leading the charge.

Witteles emerged onto the live tournament scene back in 2005 with a bracelet victory in the $3,000 Limit Hold’em event and a runner-up spot in the $1,500 Limit Hold’em event. Since those amazing scores Witteles has cashed in every single WSOP event leading up to 2013 where he has now made his second cash in one his strongest events.

Smaller Than Anticipated Field For the Four-Max

The super fast pace of Event #38 $2,500 NLHE Four-Max has seen 566-players diluted into 64. A fairly small field, but pro-heavy packed nonetheless. The chip leader is Nick Schwarmann, who is better known as the man who won the Heartland Poker Tour (HPT) Main Event at Daytona Beach back in 2011.

The Spanish pro Raul Paez is the man to catch in Event #39: $1,500 Seven-Card Stud Hi-Lo as the first day came to close. The event attracted 558-players and 160 will return for a second day of action including the record WSOP bracelet holder Phil Hellmuth who has $60k in cashes so far, courtesy of deep runs in events 16 & 35.

Paez and Hellmuth have some good company with Phil Ivey, Jason Mercier and Barry Greenstein still in contention.