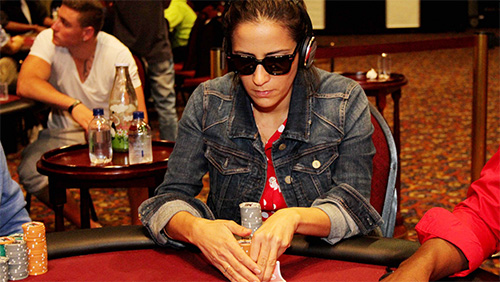 Whether it’s through her love for poker, or her love for raw food, Ronit Chamani wants to change the world. The South African diamond dealing poker player is the latest female to elevate the profile of the womens game after making the final table of the recent World Poker Tour (WPT) Emperors Palace Poker Classic – where she finished sixth – and also winning the High Roller event.

Whilst in South Africa the vibe appeared more male dominated than most of the countries that I had visited, and so I was interested in hearing a South African female perspective on poker.

This is what she had to say.

What is your perception of the level of sexism in South African poker?

“At the end of the day it depends on each individual case. I find everyone in South Africa extremely welcoming, and as a whole I have always been made to feel welcome in the casinos and home games.

“There are always going to be clashes between men and women, and actually at the last WPT event there were a few men who really gave me a hard time, but they were French.

“A lot of pros come here because of the warmth of the South African players and overall I don’t get a problem, but in the past seven years there have been one or two you meet that are sexist, and aim a little bit below the belt. Over time I have learned to deal with them, and I try to think about their perspective and perhaps something is going on in their life that makes them act that way? There was a time that the comments would make me want to go on the attack, but these days I just go into Zen mode.”

When you are on the receiving end of hurtful comments from men, how often do you think it’s because you are a women?

“Like I said, everything that happens has to be viewed on an individual case. Some comments are aimed at me because I am a woman and some aren’t. Every experience is different, but I have experienced both sides of that question.”

“I am definitely way more respected than I used to be. I used to be a fish in the game, and some guys enjoyed having a girl around and others didn’t. But winning the High Roller gives me more respect, and it allows me to pull more moves which is great.”

Do you think by winning the High Roller you are helping to increase the exposure of females in poker?

“Listen, anytime a women wins it’s good for females in poker, and if I can assist anyone in their journey it’s a bonus.

“I have learned a lot from my boyfriend Ryan D’Angelo, who is one of the best players in the world, and my game has definitely elevated through him. I owe him a lot. Being a South African female poker player nobody ever made me a part of any group during those first few years; where people discuss hands and feed of each other. So for me my poker career has always been very internal. I believe you can only get so far if you don’t have feedback from other people. Now I am dating Ryan, and being around these amazing brilliant poker minds who are now my friends, I can talk about hands and situations, and I am getting better and better, and am really excited about poker right now.”

During a recent interview with Amanda Musumeci, she told me that she had noticed the female dealers not being assertive enough with the male players. I wondered if this had anything to do with the Apartheid?

What does feminism mean to you?

“I focus my attention on being a good person and helping people out. I would like to use poker as a platform to educate people on health and nutrition. I don’t spend my time thinking about males, females and feminism. It’s not in my dialogue.

“I just want to teach people that we are what we eat and that’s what is ruling the world right now. I recently qualified as a raw vegan gourmet chef because I have had a lot of cancer in my family, and have read a lot about how food can change your life. Ryan and I share the same passion. We want to change the world through food.”