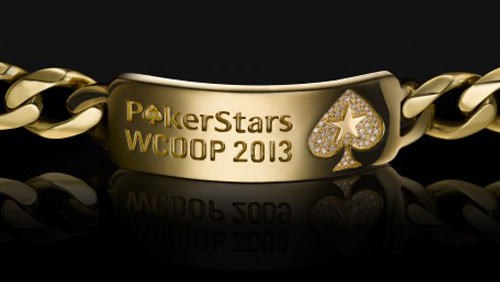 The 12th annual PokerStars World Championship of Online Poker kicked off this past weekend. Usually if someone calls something the biggest or most prestigious of its type, it’s just hype. I covered my first WCOOP for the PokerStars Blog in 2008, and having watched it grow over the years I think it’s fair to say that this series more than lives up to its billing.

Back before PokerStars had multiple tournament series running throughout the year there was WCOOP, online poker’s answer to the World Series of Poker. Across its first 11 years and 356 tournaments, WCOOP awarded more than $322 million in prize money to more than 87,000 players, and more than $54.9 million just to its winners. The schedule – 66 events this year – is more than the Vegas series and only nine less if you factor in WSOP Europe and the new WSOP APAC. Despite having buy-ins just a fraction the size of those for major live tournaments, some of WCOOP’s tournaments award top prizes that rival those earned by WSOP bracelet winners. And the quality of the average WCOOP winner is of as consistently high quality as those who win bracelets in Vegas; in fact, the two groups share quite a few players in common.

Being the flagship tournament series of the world’s largest poker room, the one place where WCOOP actually outstrips the rest of poker is in its guaranteed prize pools. It has grown from a series of eight tournaments awarding an average of just under $100,000 each to a 66-event poker bonanza where all but four tournaments guarantee at least that large a prize pool before a single player has entered. Thirteen events this year have guarantees of at least $1,000,000, the largest being the WCOOP Main Event. PokerStars is guaranteeing $8,000,000 in that one, a larger sum than every live tournament in poker history save the $10,000,000 at the recent Seminole Hard Rock Poker Open main event. Even that was a sum that the WCOOP Main Event had met every year 2008 to 2010.

The WCOOP schedule has mirrored a number of poker industry trends over its 12-year existence:

– No-limit hold’em wasn’t a particularly common game when WCOOP began in 2002, mostly being confined to high-stakes cash games, the WSOP Main Event, and a handful of live tournament festivals. But its fixed-limit cousin was the lifeblood of casino poker. Fittingly, the very first WCOOP event on July 20th of that year was a limit hold’em tournament; it drew 565 players, making it the largest of the eight tournaments on the ’02 schedule.

– The series has grown consistently. At first it added a few events each year, regularly upped the guarantees – and along with them the field sizes. The first 1,000-player field came in 2004 and every consecutive year set new highs. By 2008, with regional poker tours spreading the game’s popularity to previously untapped markets, the schedule began to resemble today’s WCOOP with 32 preliminary events. And by online poker’s pre-Black Friday peak in 2010 there were 62 events on the WCOOP schedule, with several drawing upwards of 10,000 entries.

– Variety has always been a hallmark of WCOOP. Even in the years when the WSOP move to a format that almost exclusively featured no-limit hold’em, WCOOP tournaments have spread tournaments appealing to smaller but still significant niches in the poker community. These days, from the game selection (draw, hold’em, stud, Omaha, mixed games, and nearly everything in between), to the tournament formats (freezeouts, rebuy tourneys, heads-up and short-handed tourneys, turbo tourneys, and shootouts), to the range of buy-ins (from $109 to $10,300), there’s really something for everyone.

– The series was at the forefront of the trend toward more High Roller tournaments. After the WSOP started running a $50,000 HORSE tournament, WCOOP created its online equivalent in 2007 with a $5,000 buy-in. In 2008 it ran its first $10,300 no-limit tournament, and in 2009 the series introduced a $25,000 heads-up event. For the first time this year’s WCOOP features three events with $10,000 buy-ins: one heads-up, one eight-game mix, and one no-limit hold’em with an option for a single rebuy.

– The general skill level of poker players has risen worldwide over the last decade, and WCOOP is no exception. Perhaps its most telling trait has been just how difficult it is to win multiple events. Only 17 players have made return trips to the well, together accounting for just 7.8 percent of all WCOOP bracelets. WSOP bracelet holder Daniel “djk123” Kelly stands alone as the all-time leader with four WCOOP bracelets. Just two players, Norwegian online pro Anders “Donald” Berg and American pro Ryan “g0lfa” D’Angelo, have captured three bracelets. A collection of 14 others, including well-known names like Bertrand “ElkY” Grospellier, Jason Mercier, and Shaun Deeb, round out the list of repeat winners with two each.

This year’s WCOOP has already seen the continuation of a number of those trends, including its first $2,000,000 prize pool (in Event #3); two tournaments with more than 10,000 entrants each; its first repeat bracelet winner (David “CrabMaki” Shallow); and its first champion who is also a past WSOP bracelet winner (Toby “810ofclubs” Lewis). The series runs every day through September 30th, when the Main Event will conclude. The winner of that tournament is guaranteed at least $1.25 million, but history suggests the prize should end up being worth significantly more than that.