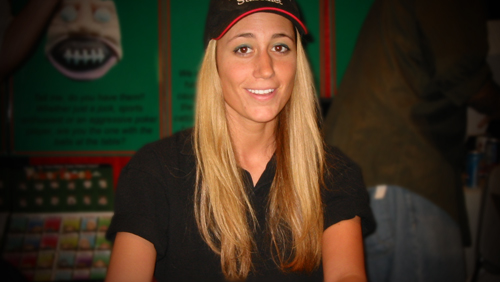 The special WPT event consisted of a single table sit n go type format and each participant represented a charity of their choosing. The former WPT anchor, Kimberley Lansing, exchanged the watching booth for the tables as she played on behalf of the Rape, Abuse & Incest National Network (RAINN); the nations largest anti-sexual violence organization.

Jessica Dawley is a 30-year old poker player from Louisville Kentucky and she was representing the Domestic Violence Project of the Legal Aid Society of Palm Beach County. Joining her was the recent 26th place finisher at the WPT Legends of Poker event, Lily Kiletto, who was representing the Breast Cancer Awareness Association.

Liz Lieu has over $800,000 in live tournament earnings and a final table appearance as a World Series of Poker (WSOP) bracelet event. Lieu was representing the Dr. Susan Love Research Foundation; and finally there was a spot for a satellite qualifier Sunny Chen, who was having the time of her life underneath the television cameras as she represented the WE ADVANCE charity.

It would be the qualifier who would be the first player eliminated from the competition when Chen got the worst of it during a three way all-in. Lieu opened from the button, Rousso made the call from the small blind, Chen moved her short stack over the line, Lieu called, Rousso also moved all-in and Lieu called once again. It was [Kh] [9h] for Rousso, [Ad] [9h] for Chen and Lieu was ahead with the pair of eights. A set of eights handing Lieu the pot, Rousso felt a little bruise and Chen was out.

Kimberley Lansing was the next player to leave when she got it in good against Rousso. It was pocket tens for Lansing against the [Ad] [3d] of Rousso, and an ace on the flop handing Rousso some more chips whilst Lansing headed to the rail.

Rousso would make it two on the spin when she eliminated Liz Lieu in fourth. Lieu moving all-in with [Ac] [8c] and both Jessica Dawley and Rousso making the call. Rousso betting Dawley out of the pot on a [9s] [8d] [5h] [6s] [Qc] board and then tabled the [Qh] [Jc] for the win.

Lily Kiletto would be the next Rousso victim when she exited in third. Rousso moving all-in with pocket nines and Kiletto calling with queen-ten. A nine on the flop, meaning the ten on the turn was inconsequential and Rousso was left to play heads-up with Jessica Dawley.

Predictably, the heads up action didn’t last that long. Rousso getting it in in dominating fashion when her ace-king crushed the king-six of Dawley. An ace on the river sealing the deal for Rousso who wins a $25k seat into the WPT Championships at The Bellagio, and a nice chunk of change for the National Council for Research on Women (NCRW) charity.

The Unbeatable Game of Poker

At what point was some technical genius going to create a computerized version of poker that could destroy all human competition? It seems that time is upon us, as Gregg Giuffria of G2 Game Design, has developed a game called Texas Hold’em Heads Up Poker that he believes can be unbeatable.

The games are being designed for fitment into the live casino environment where they play the Limit version of the game. Excited already? News reports suggest that the computer not only plays this type of game flawlessly, but it also adapts to your individual nuances, meaning it thinks on its tiny electrical feet.

During testing, Giuffria thought there was a flaw in the game when he played passively until the river before suddenly making a bet. As he watched the program folding time after time he called his team into the office for a pow-wow, ‘I called in all of my employees and told them there was a problem,’ Giuffria told the New York Times, “Then I played 200 more hands, and he never did anything like that again. That was the point when we nicknamed him Little Bastard.”

It’s believed a Phil Hellmuth endorsed version of the game is going to debuted at the Global Gaming Expo in Las Vegas. Let’s just hope they don’t call it: Phil Hellmuth: The Little Bastard.

It seems there isn’t a poker article that’s written without mentioning the death of the recreational online poker player these days, but the start of the MiniFTOPS XXIII should see a deluge of them returning from retirement for one more shot at the big time.

With the PokerStars World Championships of Online Poker (WCOOP) and the Merge Networks Poker Maximum VI also kicking off this Sunday, cyberspace is going to become a little busy.

There will be a total of $3 million in guarantees being offered by Full Tilt Poker (FTP), as well as a $750,000 guaranteed Main Event. The new series will also see events staged for Omaha, Stud, Razz, Courchevel and Irish, so there will be plenty of variety for the low rollers of the world.