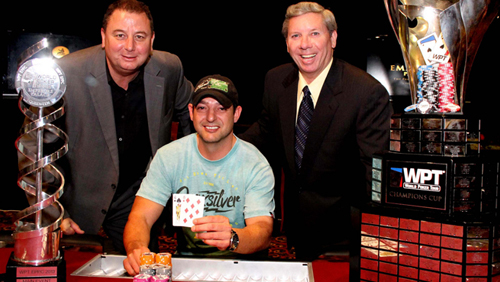 When the final table of the WPT Emperors Palace Poker Classic was set, the poker news outlets (including yours truly) were baying for history to be made in the Palace of Dreams in Johannesburg.

The day started off with a bang. Ronit Chamani moved all-in twice in the first three hands, and Wesley Weigand was soon joining in the fun. Then we had one of those magical poker moments when all three of the short stacks found hands wide enough to play for keeps.

Rob Fenner open jammed for 355,000, Ronit Chamani did likewise for 375,000 and Wesley Weigand made it a triumvirate when he too moved all-in. The rail converged around the final table as Wiegand tabled [Ad] [Kd], Chamani tabled [Ah] [Jh] and Fenner tabled [Ac] [Ts].

Wiegand looked certain to treble up, and would have been a real force to be reckoned with had the poker gods not intervened. A ten on the flop handing the worst hand the chips, the luckless Chamani was out in sixth and Wiegand was left with just 75,000, and he would lose them to Daniel Brits in the very next hand to exit in fifth place.

With the big money occupying the top three spots nobody wanted to finish fourth and that’s exactly where the reigning champion Dominik Nitsche ended up after his usually high standards slipped in a hand against Rob Fenner.

That left Nitsche with 450,000 chips and they went into the middle in the very next hand when he found [Ad] [Jd] and Daniel Brits called with [As] [Qd]. Nitsche would see a [Jc] on the flop to give him some hope, but Brits hit Broadway on the turn to send the reigning champion out in fourth.

When the action went three way the inexperienced Brits took charge, and within no time he had amassed a pretty decent chip advantage over the other two players. Then the two shorter stacks got embroiled in a mini war and it would be Du Plessis that would emerge with the chips.

Firstly, Fenner doubled through Du Plessis when he found pocket aces against pocket treys, then Du Plessis got those chips back when his [Jc] [Tc] out flopped the [As] [Kc] of Fenner before finally the pair got it in on [Qh] [7c] [4h] with Du Plessis holding [7h] [6h] for the pair and draw and Fenner holding [Th] [9h] for the over pairs and draws. The draws stayed in the deck and Du Plessis was to face Brits for the title.

The heads up action lasted nearly three hours with nothing of note to write about. It was mundanity at it’s best with both players content to wait until the perfect moment to strike, rather than make something out of nothing.

In the end, the pair got it in on a [Qd] [7s] [2d] flop with Brits holding [Qs] [8d] for top pair and Du Plessis holding [Jd] [7d] for the flush draw. The draw bricked and amazingly the rank outsider had joined the ranks of the WPT Champions Club members.