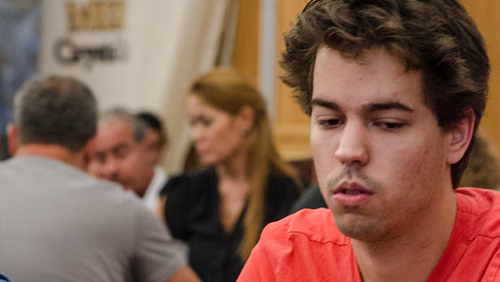 Day 2 of the WPT Emperors Palace Poker Classic was the toughest grind of the tournament thus far. The plan was to reduce the field from 139 players to 27 and it was achieved as we crept into the 11th level of the day here at the Palace of Dreams.

As the field currently stands you have to put your money on Dominik Nitsche to become the first player to win back-to-back WPT titles at the same venue. He is by far the most experienced, and arguably, the most technically gifted player remaining in the field. Not only does he have the chip lead, but he has a map that shows him how to get to the summit of this very event and is on a bit of a roll after his recent third place finish in the €10,000 World Series of Poker Europe (WSOPE) Main Event.

Nitsche is among five players who have made the money for the second successive time here in Joberg: Aston Soon Shiong, Warren Zackey, Wesley Wiegand and Jason Strauss the other four, with Wiegand and Strauss former final tablists.

One man who very nearly added his name to that list was Greg Ronaldson. The Joberg local finished 14th in this event last year, and looked on course to repeat that feat on his birthday no less. Unfortunately, Aston Soon Shiong and a straight would interfere with his birthday planning, and Ronaldson was eliminated in the bubble position holding trip queens.

It was a day of celebration all round. Not only was Ronaldson trying to have a celebratory 30th birthday but there was diamonds and love in the air also. Matt Lawrence and Maria Mayrinck are partners in every sense of the word, and the seat draw pitted them on the same table when Day 2 began.

At the first break Lawrence took Mayrinck to one side and presented her with a diamond ring. A tearful Mayrinck returned to the table, and as she proudly showed her new glitz to her tablemates, Lawrence took advantage by three-betting her out of the pot. Now that’s what I call a consummate professional. Mayrinck would fall well short of the money, but Lawrence would finish just behind Nitsche and must be a favorite to make the final table.

Other notables that failed to make the cut included last years runner-up Jerome Bradpiece after running AK into the 99 of Jason Strauss; MMA fighter Adam Speechly who ran pocket treys into KK and QQ; Poker Hall of Famer Mike Sexton who ran JJ into KK; Melanie Weisner who ran 55 into 66; Leo Margets who didn’t catch her flush and Barny Boatman who simply ran out of steam.

Players to keep a beady eye on as the tournament marches towards its final table include Amatos Gomila, Eugene Du Plessis, Benjamin Cole and Rob Fenner. Gaelle Baumann and Ronit Chamani are also in the field.