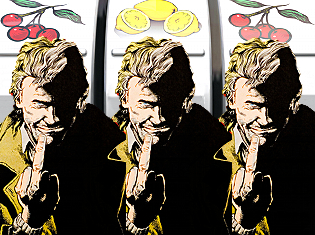 Marvel Studios’ Thor: The Dark World movie opened in North America this week, following its release around the world a week earlier. The sequel to the 2011 film Thor has already grossed over $150m worldwide and could top $300m by the end of this weekend. Interest in the Norse hero/Marvel character surged following his appearance in Marvel’s The Avengers movie, which has earned over $1.5b since its 2012 release. Since Hollywood loves sure things as much as Toronto mayor Rob Ford loves drunken stupors, the Thor sequel’s success virtually guarantees there will be at least one more Thor flick in our future.

But the success of Thor and movie adaptations of other Marvel comic characters has also ensured that gamblers won’t be enjoying Marvel-branded slot play much longer. For years now, Marvel has struck licensing deals with brick-and-mortar casino suppliers as well as online gambling software developers Playtech and Amaya Gaming Group subsidiary Cryptologic, leading to slots featuring Thor, Captain America, the Fantastic Four, the Hulk, Iron Man, the Silver Surfer, Spiderman and the X-Men. But in 2009, Marvel was purchased by the Disney conglomerate, and Disney is firmly agin’ gambling, refusing even to equip its cruise ships with onboard casinos, lest Dad ruin the family vacation by dropping the kids’ ice cream money on an ill-advised spin of a roulette wheel. 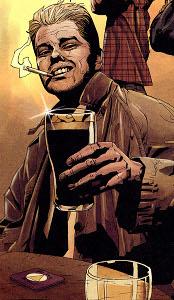 Disney’s anti-slots campaign is apparently intended to stave off accusations of hypocrisy that could undercut its anti-casino stance in Florida. Las Vegas Sands is one of the chief engines of the push to expand Florida’s gambling options, and LVS chief operating officer Michael Leven has argued that Disney’s simultaneous acceptance of slot licensing revenue while publicly advocating against the spread of casino gambling “demeans them significantly.”

Disney’s stance will have a direct impact on companies like Playtech and Cryptologic, for whom Marvel-branded slots are prime earners. However, nature abhors a vacuum, and Marvel’s chief rival DC Comics, which has already struck slot licensing deals using its own superhero characters including Batman, the Green Lantern and Superman, will likely begin rummaging through its archives for lesser known characters who might enjoy some slot exposure.

Our personal choice for DC slot immortality would be John Constantine (pictured right, in his natural element, and above, counting to three), the morally-agnostic anti-hero of the original Hellblazer series, whose primary ‘sidekicks’ consist of cigarettes and pints of Guinness. Seriously, if there’s any character likely to connect with gamblers, John’s your man.