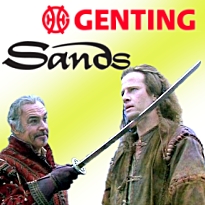 Attendees at this year’s Global Gaming Expo (G2E) are stoked about their future in the gaming industry, according to a survey of 1,150 industry professionals at the three-day event in Las Vegas. The survey, conducted on behalf of G2E producer Reed Exhibitions, found that 76% of respondents weren’t worried about their future employment (by comparison, a recent Gallup poll found less than 70% of all American workers expressing the same confidence). As for the overall gaming industry’s fortunes, 77% of G2E respondents felt the industry would do better in 2012 than in 2011 and 80% believed the company for which they worked would kick into a higher gear next year. Seriously, it’s like the survey was filled out by the über-joyful cast of Up With People.

Next year is already looking better for certain land-based casino companies. On Thursday, Florida’s 1st District Court of Appeal upheld a lower court decision that would permit lawmakers to authorize casino gaming anywhere in the state without the need for a voter referendum. While the issue will presumably end up in Florida Supreme Court, legislators in Florida’s House and Senate are expected to introduce companion bills authorizing two to three resort casinos in Miami-Dade and Broward counties. These bills could be introduced as early as Friday and the debate/bickering over them would begin in January.

Plenty of casino outfits have been positioning themselves for this very moment, and the scrap over Florida’s new casino licenses could turn ugly. Las Vegas Sands’ Sheldon Adelson has long coveted a Florida operation, repeatedly stating his willingness to invest $3b in a Florida resort casino project. Then in May, Malaysian casino operator Genting paid $236m for 14 acres of Miami waterfront property on which it hopes to build Resorts World Miami. Genting operates Resorts World Sentosa in Singapore, where the only other casino licensee is Adelson’s Marina Bay Sands. As such, you’d think these two would have learned to live side by side.

Apparently not. According to the Miami Herald, Las Vegas Sands is in discussions with the Miami World Center group, which controls eight blocks of downtown Park West real estate, a perfect spot for Sands to set up shop. But Sands is telling state officials that, like the Highlander, there can be only one resort casino in Miami-Dade county. Bottom line, Sands wants an exclusive gaming license for the jurisdiction and it also wants Genting in the awkward position of explaining to its shareholders just where that $236m went. Oh, it’s on, bitches… The US diplomat who referred to Adelson as ‘combative’ may not have been very diplomatic, but he wasn’t far off the mark.