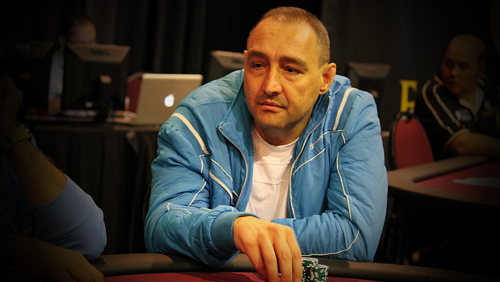 World Poker Tour (WPT) Emperors Palace Poker Classic has stored its first day of action into the memory banks, and its Nahum Lum who headlines the poker news outlets after leading a group of 54 players from a loose and aggressive days play in the heart of Johannesburg.

The WPT returned to the Emperors Palace in Johannesburg for its second year, and unlike the majority of its non-American events, the early indicators are waving the green light for an increased attendance.

Day 1A attracted 85 entrants, which was a 15% increase on last years field at this stage of the competition, and the reason for the increase is the reason this WPT event should be number one on the itinerary of every goal setting poker player in the world.

The local players are nuts.

This year sees the introduction of a stipulation that allows players to re-enter as many times as they like between now and the end of registration after the first level on Day 2. Whatever your feelings are on the re-entry rule, it certainly does the trick when it comes to increasing the prize pool.

The local South African players love to gamble and the rise to prominence of Nahum Lum, the Day 1A chip leader with 123,725 chips was a classic case in point.

Even Lum will be the first player to admit that he barely had to lift a finger in order to race to the lead in this one. Instead players chose to hand him chips like guests hand out grains of rice at a wedding.

If history is a good indicator of the future of things to come then Lum should be rubbing his hands. This time last year a certain skinny German called Dominik Nitsche topped the field, and four days later he was picking up his first WPT trophy (actually that’s not strictly true as his trophy is still in the casino one year later!)

Nitsche was also in the field determined to defend the trophy that he won so magnificently a year ago. Unlike Lum, Nitsche could not find the rub of the green when it came to amassing a big stack, but he ended the day with 30,225 chips and is much more experienced player than the one that graced this field a year ago.

It was also a great day for the ladies. Running alongside Day 1A was the R10, 450 No Limit Hold’em (NLHE) Six Man side event and the final 10 players contained no fewer than four females with Jennifer Leigh (9th), Amanda Musumeci (8th), Leo Margets (3rd) and the eventual winner Diana Svensk once again proving that the increase in female attendance and competitiveness is on the rise.

The Main Event was also plush with female competitors. Gaelle Baumann led the field at dinner with a stack peeking over the century mark. The Winamax Pro would end the day on 85,300 to hand her a top 10 spot, and Melanie Weisner who ended the day with 68,550 joined her. Amanda Musumeci (29,900) and the WPT Emperors Palace High Roller winner Ronit Chamani (41,800) also faring well.

Day 1B will commence at 19:00 (SAST) and CalvinAyre will be on hand to bring you a selection of interviews from the games biggest stars.