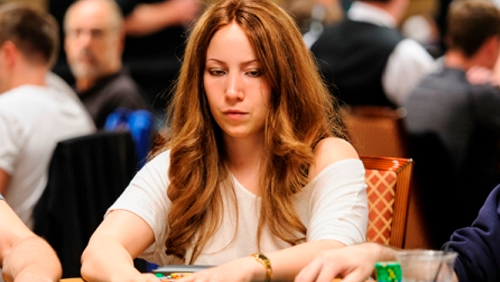 Melanie Weisner is a 27-year-old poker pro from Houston Texas who first came to prominence on the online felt, where she quickly gathered a reputation as one of the best heads-up sit n go specialists in the game.

In 2011, she drew the attention of Full Tilt Poker where she was added to the roster of Red Pros, just in time to host the heads-up event at the Full Tilt Online Poker Series (FTOPS). She has since worked with the likes of PokerStrategy and Lock Poker and with her number three position in the Global Poker Index (GPI) Ladies Rankings, seems the perfect fit for a female perspective on poker.

When you have to wear make up or behave in any way that may fall into the category of hyper-sexualisation. Do you think you have a choice, or do you believe this is just the way it has become for women in order to survive?

I think that a lot of girls will say things like “I wear makeup for myself” (and that can be applied to clothing, heels, etc.), and it’s a tough concept to explore because while women may feel that they look more beautiful when adhering to a certain standard or ideal, these ideals have been bred on a distinct social ground and I do believe that women who adhere to it have a social advantage.

I wouldn’t say I feel under pressure to be anyone I’m not, but I do feel that I magnify or downplay certain aspects of myself and censor/temper my words accordingly–but this is true of any profession in some regard, there’s always going to be a professional filter.

I actually feel that I’m part of a generation where women are not only given equal opportunity in a lot of regards but expected to live up to an independent ideal. I feel that my particular upbringing leads me to exude quite a bit of dominance, but I have experienced plenty of culture and situations that seem to expect a more socially submissive female involvement.

It doesn’t anger me, because I enjoy presenting myself well.

My view of the poker world, and especially the tour, with regard to hyper-sexualization is that it is only such because its composition contains of a large population of young, (for the most part) under-socialized men that experience socialization with females in specific scenarios. I’ve found that a lot of these scenarios go hand and hand with the poker tour in a way that both glamorizes and objectifies women (i.e. models at tournaments, strip clubs) because there are few women in poker who the guys socialize with on a regular basis, and few in the industry in general.

I think the media does a decent job, although most established female pros seem to have a tougher skin than most. I’d say the glamorization and focus on sexuality (which I don’t think is that bad) probably entices, as many females to the game as it might turn off, no pun intended.

I definitely share this view. I’d say I use this to my advantage specifically because I am able to employ it well–but this is more than about just looks; it’s also about an ability to speak well, be charismatic and engaging, and have a good visual presence and aesthetic–not just necessarily be pretty or sexy.

It doesn’t really bother me because I have been exposed to this idea my entire life through theatre and performing arts. It’s really just the reality of television and marketing, and it’s really a bigger question of whether or not it’s right to make physical appearance an important consideration for on-camera roles (which is unlikely to ever not be the case).