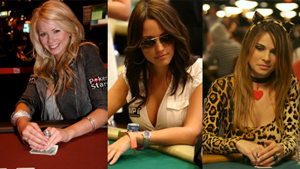 If you are female, have a great figure, look aesthetically pleasing to the eye and have the intelligence and the time to learn how to play poker then what are you waiting for? There has never been a better time to find a spot in the poker circus. It’s going women crazy and I for one think it’s a great thing.

The August edition of BLUFF magazine is adorned with the lovely image of the Bodog sponsored pro, and CalvinAyre hostess, Ms. Tatjana Pasalic; when the ESPN coverage of the 2013 World Series of Poker (WSOP) hits the airwaves we will be gazing longingly into the eyes of Kara Scott; the International Stadiums Poker Tour (ISPT) saw the return of pokers new Mom Michelle Orpe and Lynn Gilmartin, Laura Cornelius, Sarah Grant and Kristy Arnett are doing some wonderful things over at PokerNews.

At the 2012 WSOP Main Event the press were all in a gaggle over the efforts of Gaelle Baumann and Elisabeth Hille. The 10th and 11th place finishes providing inspiration throughout the globe, never better demonstrated than the 41% increase in participation when this years WSOP ME rolled into town. 298-female players took their seats, representing 4.7% of the total field size – the largest display of lipsticks, handbags and perfume the WSOP ME had ever seen. Jackie Glazier held the title of ‘last woman standing’ with an impressive 31st place that earned her a sponsorship deal with 888 Poker.

But it wasn’t just the marquee event that was a great success from a female perspective. The whole series was a snapshot of the growing improvement of female poker players. Kristen ‘krissyb24’ Bicknell won the ladies event for $173,922. Bicknell is a professional poker player from Canada who has attained the status of Supernova Elite on PokerStars; Dana Castenada took down Event #54 $1,000 No-Limit Hold’em (NLHE) for $454,207 and what about the performances of Loni Harwood? Six cashes, two final tables, over $800k in earnings and a WSOP gold bracelet after her triumph in Event #60 $1,500 NLHE.

Things are rolling so well for the ladies at the moment I wouldn’t even bet against a Poker Hall of Fame berth for IveyPoker Pro Jennifer Harman. The high stakes cash game player who was short listed in 2012 but failed to make cut, is one of the favorites to find her way right back there this year.

So it should come as no surprise that the WSOP have announced that there will be a ladies event at the 7th Annual World Series of Poker Europe (WSOPE). It will be the first time a ladies bracelet event has been held outside of the USA and the €1,000 two-day event will kick things off when the event gets underway in the French capital on 11-Oct.

At the risk of getting a few bottles of Viktor and Rolf thrown at my head, has the WSOP just created the easiest path to a bracelet in recent times? The American equivalent attracted 954-players, but when you consider when Antonio Esfandiari won the opening €1,000 event of last years WSOPE, his field size was a much smaller 626 entrants, then you do start to worry about the potential field size of the inaugural WSOPE ladies event.

In their press release the WSOP Executive Director Ty Stewart stated, “We need to do more to promote ladies involvement within the game, and with the many breakout stars in the region, it feels like a women’s European championship is long overdue.”

Fortunately, I think the promotion of the ladies game has already started thanks to the sterling efforts of those mentioned in the beginning of this article. Throw in the good work carried out by the likes of Ana Marquez, Maria Ho, Xuan Liu, Victoria Coren and Liv Boeree; plus the scintillating performances of Vanessa Selbst and the Bet Raise Fold stardom of Danielle Andersen then you can see why the WSOP have taken the decision that they have. Let’s just cross our fingers and hope that they get the numbers needed to make a European ladies event a permanent fixture.

Calling the Clock: Woods in Jail, Schwartz Setting Records and an Aussie Millions Round Up
Lee Davy
23 January 2015