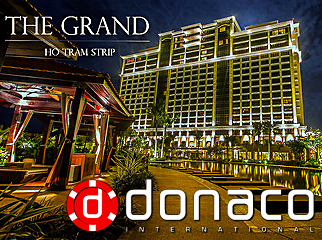 It took a roundabout way of getting to this stage, but Vietnam’s first integrated resort-casino finally opened for business on Friday. The launch of Asian Coast Development (Canada) Ltd.‘s The Grand – Ho Tram Strip (pictured right) was preceded by an invite-only VIP event featuring familiar Vietnamese public figures and some international guests, all intent on checking out the venue’s 35 mass-market gaming tables, six VIP tables and 614 electronic gambling machines.

The venue’s first phase also features a 541-room hotel, 10 bars and restaurants, three swimming pools, a spa, convention space and plenty of luxury retail shops. A second phase is already in the works, and will add a further 559 rooms plus additional amenities, including a Greg Norman-designed golf course.

Ho Tram Project Company general director Colin Pine declared the resort’s opening to be the result of a “monumental effort” that heralded “a new era of tourism for Vietnam.” Company COO Michael Santangelo says international tour companies that have previewed the “lavish” facility have already seen a spike in bookings. John Webb, the joint’s VP of Hospitality, was even more generous with the hyperbole, saying “a little piece of history starts today” with the launch of the “over-awing” and “utterly magnificent” resort.

DONACO EXPANDS LAO CAI CASINO PROPERTY
Further north in Lao Cai province, Donaco International is making moves to boost its stake in the Lao Cai International Hotel, in which Vietnam’s first licensed table gaming operation was launched in 2002. Donaco currently holds a 75% stake in the casino-hotel, with the remaining 25% held by the state-owned PetroVietnam Sapa Tourism Joint Stock Company (PVST). Donaco has reached a non-binding agreement in principle to pay $4m to purchase an additional 20% in the property, leaving PVST with a mere 5% stake. The deal is expected to close in around three months.

Donaco is currently undertaking a serious expansion of the Lao Cai property, boosting the number of rooms from 34 to 428, while upgrading those rooms from three-star to five-star standards. Donaco notes that most of the property’s existing rooms are provided free of charge to visiting VIP gamblers. Donaco also expects to “at least double” the venue’s current roster of eight gaming tables, with the potential to accommodate as many as 40 tables. Donaco estimates the price tag behind these plans will top out at $52m, of which $24.7m has already been allocated, and the remainder to be furnished via cash on hand or generated from ongoing operations.

Business has been brisk at the property, thanks to recent improvements in rail and road infrastructure on the other side of the Chinese border in Yunnan Province. The property’s revenue was up 42% to $3.9m in the first quarter of 2013, while profits rose 48% to $707k. The company has yet to file its Q2 figures, but suggested these were also “much stronger” than the same period last year.

Donaco’s other gaming holdings include the Way2Bet online wagering comparison site, which features input from most major Australian online bookies. Donaco recently sold its Tab Active television wagering service to TabCorp Holdings Ltd. for AU $863k. The service, which has been operating since 2008, allows TabCorp, TattsBet and Racing and Wagering Western Australia account holders to access info and place wagers.