Bally Technologies embarks on $1.3b acquisition of SHFL Entertainment 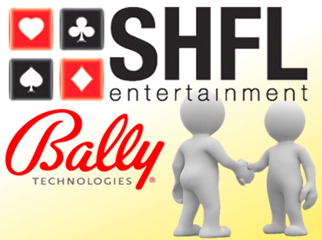 American gaming device maker Bally Technologies has announced a $1.3b acquisition of rival SHFL Entertainment. The boards of both companies have signed off on the deal, which is expected to be complete by the end of Q2 2014, assuming shareholders and regulators offer no objections. The deal price represents a 24% premium over SHFL’s stock value as of the end of Monday’s trading, and both companies’ shares are up sharply on Tuesday’s news. Financing for the deal was provided by Wells Fargo, JP Morgan Chase, Bank of America, Goldman Sachs and Union Bank NA.

Bally CEO Ramesh Srinivasan issued a statement lauding the combination of “two highly complementary and customer-centric gaming technology companies with a shared commitment to innovation.” SHFL CEO Gavin Isaacs noted the “significant premium” being offered to SHFL shareholders, while promoting the idea that the two companies would fuse into a “larger, stronger organization that we believe will best position the company for future growth.”

Both Bally and SHFL have made efforts to broaden their horizons into the online realm, with each company having received online poker technology licenses in Nevada. Bally’s iGaming platform has inked free-play deals with land-based casinos in Las Vegas, Atlantic City, Connecticut and Pennsylvania, and recently inked a US-facing deal with online payment processor Optimal Payments. SHFL’s online platform has inked partnerships with Amaya Gaming and GameAccount Network, in addition to supplying SHFL table game products to European live-dealer specialists Evolution Gaming.

The deal follows a similar consolidation play by lottery and gaming tech outfit Scientific Games, which embarked on a $1.5b acquisition of gaming device maker WMS Industries in January. Way back in February, CalvinAyre.com’s Vince Martin predicted Bally would make a play for SHFL, so feel free to besiege our resident Kreskin for insights into which lottery numbers are coming due this weekend.