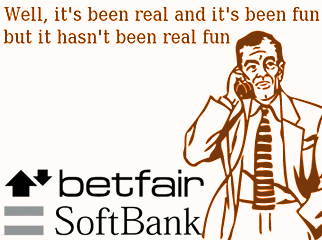 Last month, UK betting exchange Betfair announced that its longtime legal eagle Martin Cruddace would be stepping down following nine-plus years of yeoman service to the company. Cruddace, who joined Betfair in July 2004, intends to vacate his post for the last time at some point after the summer, no doubt shagged out after having finally stuck a stake into two years worth of attempts by rival William Hill to classify Betfair customers as bookies for purposes of the UK horseracing levy.

Befair lost another longtime companion on Monday after Japanese financial outfit Softbank sold its 10.6% stake in the company at a significant loss. Softbank had bought into Betfair in April 2006 at £13.20 per share – an even higher price than Betfair’s £13 IPO benchmark in 2010. The 11m shares Softbank sold to Deutsche Bank on Monday changed hands at a mere 807p, a yawning price gap somewhat ameliorated by fluctuations in the value of the Japanese yen over the past seven years. Softbank’s credit rating was recently downgraded to ‘junk’ status by ratings agency Standard & Poor’s, so any cash infusion is welcome at this point.

News of the sale sparked a precipitous dip in Betfair stock, at one point dropping 53p in a matter of minutes before closing out Monday down 39.5p. The stock rose 17p on Tuesday, closing at 855.5p. Softbank had supported the proposed 975p/share takeover bid by CVC Capital Partners, but when that bid failed, the cash-poor Softbank decided to cut its losses rather than wait for Betfair CEO Breon Corcoran’s new regulated market strategy – including its recent move to partner up with Atlantic City’s Trump Plaza casino on a New Jersey online gambling venture – to start generating dividends. Softbank’s exit cuts the holdings of Betfair’s pre-float shareholders to around 40% of the total pie.