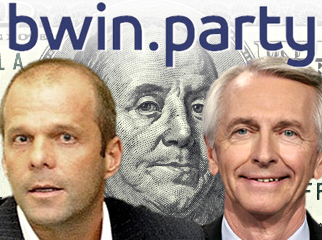 The Commonwealth of Kentucky is $15m richer after reaching a financial settlement with Bwin.party digital entertainment over the pan-European online gambling operator’s past dealings with Kentucky residents. Kentucky had filed a civil action against the company in August 2010, claiming it was seeking to recover Kentucky citizens’ gambling losses incurred from their dealings with PartyGaming prior to President George W. Bush signing the Unlawful Internet Gambling Enforcement Act (UIGEA) into law in October 2006.

PartyGaming pulled out of the US market following passage of the UIGEA and announced its intention to merge with Bwin in 2010. In 2009, PartyGaming agreed to pay the US Department of Justice $105m to atone for its former US presence and co-founder Anurag Dikshit paid $300m to be able to fly into US airports without being clapped in irons.

On Friday, Kentucky Gov. Steve Beshear (pictured on the far right, next to Bwin.party CEO Norbert Teufelberger) announced that Bwin.party had forked over $15m sometime earlier this month to settle the civil suit. The Lane Report quoted Beshear saying he was “pleased that we were able to recover losses on behalf of Kentuckians.” Beshear also praised Bwin.party for “making every effort to comply with the laws of the United States and demonstrate that they want to be known for their integrity and honesty in this industry.”

Kentucky’s Bwin.party payday is the state’s second successful online shakedown this month. Last week, Kentucky announced it had received a $6m check from the DOJ in exchange for dropping its federal claim on the domains of Absolute Poker and Ultimate Bet, which were seized by US federal authorities on April 15, 2011 aka Black Friday. That settlement wasn’t connected with claims Kentucky made against the domains of the other Black Friday indictees PokerStars and Full Tilt Poker, nor was it connected with claims made against 141 other online gambling domains in 2008, which Kentucky insists it is still vigorously pursuing. Justice Cabinet Secretary J. Michael Brown said the state would not rest “until all these unauthorized companies are held accountable for their actions.”

Bwin.party’s decision to cut a check to burnish its veneer of respectability in the US – one of Calvin Ayre’s predictions for 2013, for what it’s worth – may be connected with the company’s recent flip-flop on whether it intended to pursue a Nevada online poker service provider license. News of the Kentucky settlement also comes on the same day that Atlantic City casinos are supposed to declare their relationships with online partners if they wish to make the mid-November launch date of New Jersey’s regulated online gambling market. Bwin.party already has a three-way joint venture with AC casino licensees Boyd Gaming and MGM Resorts, but that relationship has yet to be approved by New Jersey regulators.