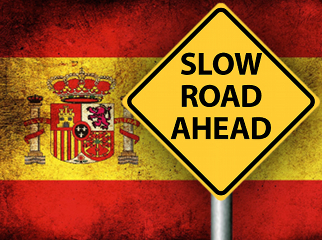 Spain’s gambling regulator released first quarter figures that indicate the country’s online gambling market has plateaued a year after launching. According to the Dirección General de Ordenación del Juego (DGOJ), new signups in the first three months of 2013 raised total Spanish customer registrations to 1.16m, a 15.2% bump over Q4 2012. But Q1’s monthly average of 51,342 new accounts was down from Q4’s 72,453, which was down from Q3’s 107,353.

Given the state of the Spanish economy, plateauing could be considered progress. Late last month, Spain’s National Statistics Institute announced the nation’s overall economy had contracted for the seventh consecutive quarter and Prime Minister Mariano Rajoy’s government has warned of a 1.3% economic decline in 2013. The European Union’s fourth largest economy is also home to nearly a third of the EU’s jobless. A record 27% — 55% of those aged 16 to 24 – of Spain’s work force are unable to find jobs. Small wonder that Rajoy appears set to allow Sheldon Adelson to post a big ‘smoke ‘em if you got ‘em’ sign above Las Vegas Sands’ proposed EuroVegas casino project.

In June 2012, Spain handed out 53 online gambling licenses, via which a select few operators are thriving while the majority complains about unprofitability (or sends Spain a ‘dear Juan’ letter). It remains to be seen whether the highly anticipated introduction of online slots will raise all boats or simply give already fat companies another chin.

Meanwhile, the DGOJ has yet to announce a replacement for former Director General Enrique Alejo, who abandoned his post on April 24 to take a job as corporate chief with Spanish public broadcaster RTVE. The DGOJ swears the delay in filling Alejo’s shoes won’t impact work that’s already in motion, such as writing regulations covering online slots or the expansion of sports betting options. It may seem odd that a nation struggling with unemployment would have such difficulty getting a response to a ‘help wanted’ sign, but que sera sera.