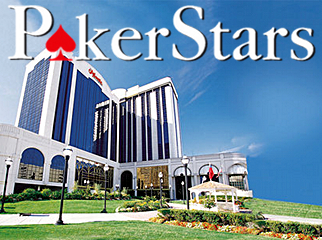 The parent company of online poker titan PokerStars is still very much interested in acquiring an Atlantic City gambling den, and it doesn’t necessarily have to be the Atlantic Club casino hotel. The day after Atlantic Club boss Michael Frawley declared the death of the Rational Group bid to acquire his gaming joint, PokerStars spokesperson Eric Hollreiser has declared Stars to be bloodied but unbowed in its quest to acquire a brick-and-mortar toehold in the seaside gambling town.

On Wednesday, Frawley revealed that the deal the Atlantic Club’s owners Colony Capital LLC had struck with the Rational Group in December had a deadline of late April. If, by that date, Rational had yet to secure its interim gaming license from New Jersey regulators, the deal was off. But delays in completing Rational’s paperwork meant the 120-day countdown regulators give prospective licensees didn’t start until April 10, delaying Stars’ license judgment day until early August.

In a five-part tweet issued late Thursday afternoon, Hollreiser said Rational/Stars had “received a purported notice of termination” of the deal “several days ago.” It had been Rational’s “expectation and understanding, based on the ongoing dealings between the parties that the closing date would be extended to allow the transaction to be completed.” Rational “remains entirely committed to resolving this situation and to our investment in New Jersey.”

PLAYING HARD TO GET?
Frawley has yet to comment on Hollreiser’s statement. The deal in question was struck months before Gov. Chris Christie signed the state’s online gambling legislation, and since the only eligible online licensees are AC casinos, the Atlantic Club’s market value has appreciated significantly. Scuttlebutt has the club’s hedge fund owners smelling leverage and this is all just a ploy to compel Stars to improve on its original offer (undisclosed, but estimated between $11m and $20m).

Prior to Hollreiser’s statement, Christie was asked at a press conference whether he was worried that the Atlantic Club could now close and throw a couple thousand employees onto the street. NorthJersey.com quoted Christie saying he felt “the exact opposite” of worried, choosing to view the dead deal “potentially as a positive development.” Christie suggested it was “more likely than not, the Atlantic Club is rethinking their position, and think that they can get more money for their place.” Not for nothing, but after the debacle that is Revel and six straight years of casino revenue decline, Christie would like nothing better than for the rest of the world to watch a bidding war over one of AC’s dozen gaming joints.

ENTER ONE EXTREMELY MOTIVATED SELLER…
Colony Capital might do well to realize that Stars also has options. Atlantic City casino profits may not be extinct but they’re definitely endangered. Casinos are going for as little as $20m down and the assumption of debt. For a month now, word has been circulating that one AC licensee in particular has been looking to move a casino. Better yet, this seller is extremely motivated and has already had talks with Stars about a similar deal.

In March, Hollreiser revealed that Caesars Entertainment had approached Stars earlier this year about acquiring Caesars’ Rio property in Nevada. Likely concluding that Nevada would never license them, Stars said it declined Caesars’ offer, after which Caesars released the kraken, er, the American Gaming Association. Caesars is now reportedly looking to shift one of its four AC casino properties. The Atlantic City Showboat posted an operating profit of $2.7m in 2012 – less than a third of 2011’s $9.1m – but non-operating expenses pushed the casino deep into the red. And need it be said that Caesars’ need for cash is the stuff of legend?

Sadly, the likelihood of Stars and Caesars shaking hands on a deal involving the Showboat is slim. Caesars simply can’t afford to let Stars swim in New Jersey’s online poker waters, just like they don’t let the seals and the killer whales share the same tank at MarineLand. Anyway, Penn National Gaming has been tipped as a more plausible Showboat buyer. Penn’s interest in the region is well known and VP of Regional Operations Jay Snowden is the Showboat’s former GM, while COO Tim Wilmott is former CEO of Harrah’s Entertainment (Caesars former alter-ego). Caesars boss Gary Loveman was recently in AC talking to Penn execs, so this Showboat appears to have sailed.

Then again, this is New Jersey, where every day is a rich tapestry. So stay tuned…